I can just imagine the many bird and waterfowl species and sightings that occur right here at Oyster Cove if one could hang out each day with a pair of binoculars at this time of the year!  It’s been easy to see 5-8 species at once many times this past week.  The eagles continued to land and eat their fresh catch several hundred feet out on the ice as mentioned previously.

This past Monday the water around our osprey nest and all of Marshy Creek was frozen over.  But there is a group of mallards that know each day a neighbor will throw out corn early evening.  So they waited on that cold cold ice….

When the corn was thrown, the mallards went crazy as normal.  This perked the interest of a lone tundra swan that was several hundred feet out in an open water area with a dozen Canadian geese.  The tundra swan climbed out of the water and onto the ice and proceeded to make his way to the commotion, without much slipping!  (You can see why with the claws on his webbed feet.)  He was fun to watch. 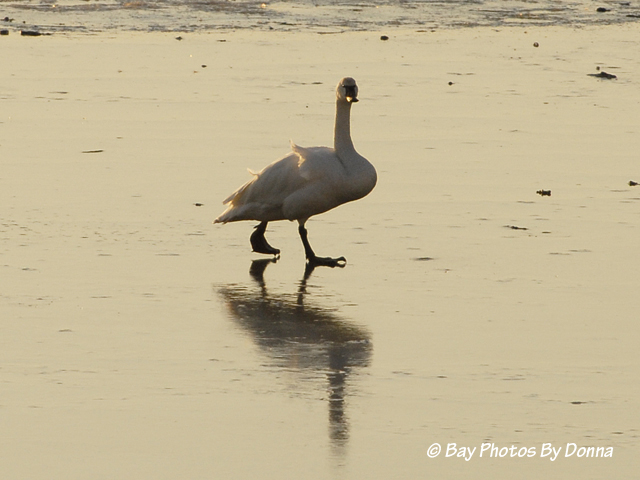 He made his way right to the middle and feasted along with the mallards and seagulls.  The dozen Canadian geese who watched the tundra swan were now curious, and they made their way to the gathering and joined in!

We awoke Thursday morning to four inches of snow.  That evening, most of the ice around our osprey nest had broken away & moved out with the tide, leaving a large open area of water for the waterfowl.  Marshy Creek remained covered, so we had lots of visitors!

For the first time, I sighted an American Wigeon just 20 feet from the osprey nest base.

Alongside him, buffleheads and Canadian geese were feeding as well, except for the designated ‘looker’.  Just how do they decide who eats and who watches??!!  It is really fun to watch their reactions.

Just 20 feet from the Canadian Geese we had a small raft of Greater Scaups….

And a pair of tundra swans just lazily bobbing along.

This morning there were more waterfowl everywhere.  I captured this Greater Scaup in the early morning sun.

A short time later, the following lone mute swan came along who has been around a few times the past couple weeks.  That little bufflehead scurried along to get past the swan who didn’t care to bother him.

The Canadian geese were also a little nervous of the mute swan and made their way as a group away from him.  He wasn’t fazed by anyone.  Hanging within the geese was a single coot and a canvasback who’s taking a dive. 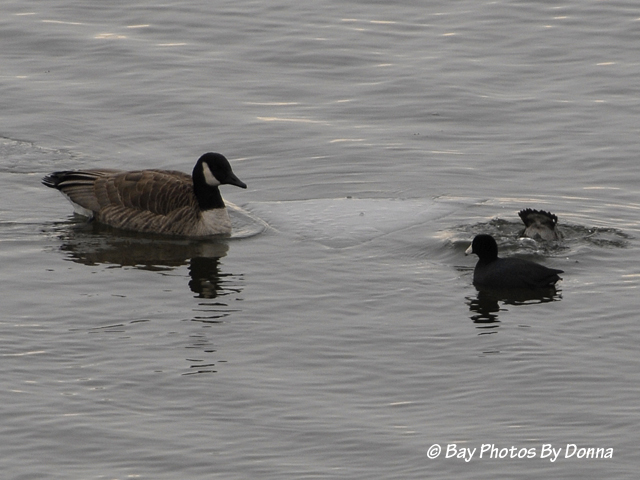 Here’s a shot of the canvasback after he popped back up.

Most of these ducks will be leaving soon, to head back north to Canada and the Artic.  Enjoy them while we have them and can!

2 thoughts on “Our Winter Waterfowl”