Along With The Geese & Tundra Swans, Those Cute Buffleheads Are Back!

Our area experienced 10-15 mph windy conditions this past week, which kept waterfowl activity to a minimum along our berm and around our osprey nest.  But in the distance, you could hear geese and tundra swans, both arriving in the area more and more each day.  By Thursday, our conditions had calmed and the mallards were back hoping for a hand-out along the berm from a friendly neighbor.  Friday morning’s sunrise was beautiful and I could see our waters and skies dotted with our migrating visitors.  A couple of distinct black and white ducks out past the nest caught my eye; my binoculars confirmed buffleheads have begun their return to us for the winter!  These are the smallest ducks in North America, getting no larger than 13 1/2 inches.  Buffleheads breed in the summer from Alaska and across Canada, and winters along both the east and west coasts and interior lakes/rivers in the United States.  These to me are the cutest of the waterfowl, with the males sporting a ‘tuxedo-look’ and comically scooting on the water as much as 15-20 feet as they land. 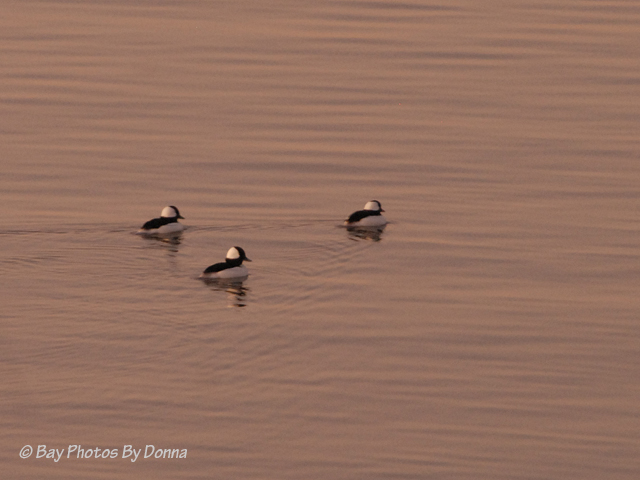 Two more males arrived to join the three as they made their way past our osprey nest.

Then a sixth male bufflehead landed and met the five; they all then swam over to CBEC. 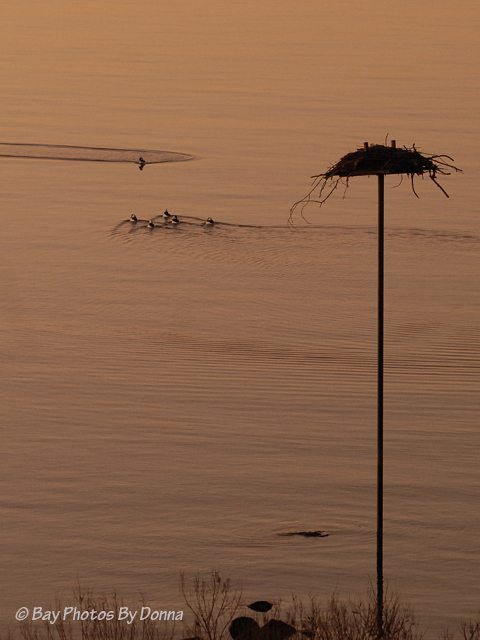 Both yesterday and today, I again spotted a small group of male buffleheads.  Within the next month,  both males and females will be abundant.  I was also excited to see Blake the Blue Heron yesterday, the only time this week.  He was at the base of the osprey nest and walked to the right along the berm, searching for food.

Mallards swam around Blake, neither caring about the other’s presence. 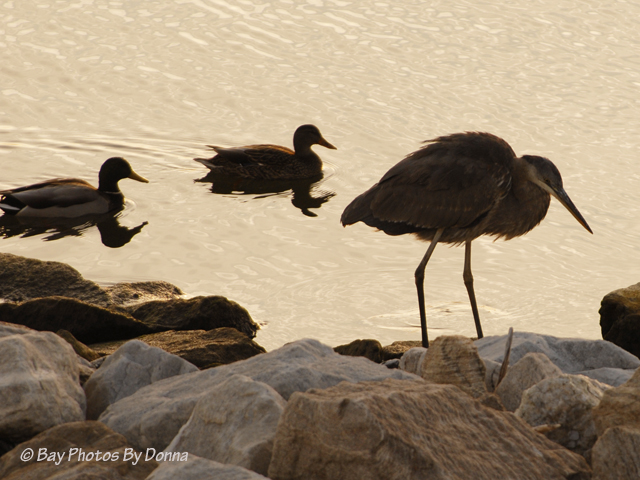 Blake didn’t seem to have much luck at spotting any fish for dinner and took flight over to the point for another try. 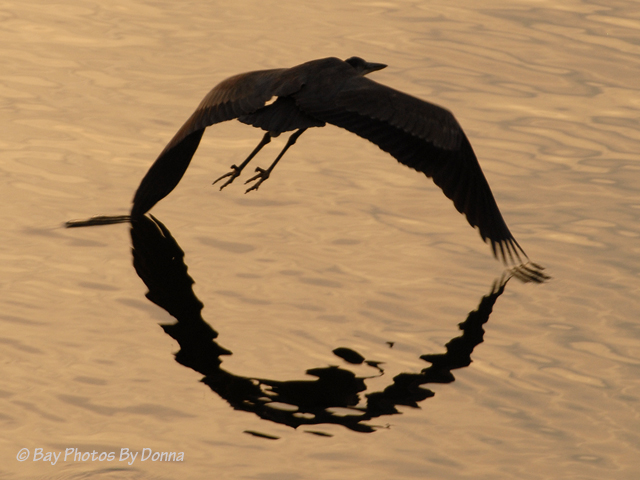 In the evenings, the Canadian geese are arriving by large numbers in search of Marshy Creek’s and CBEC’s protective coves. 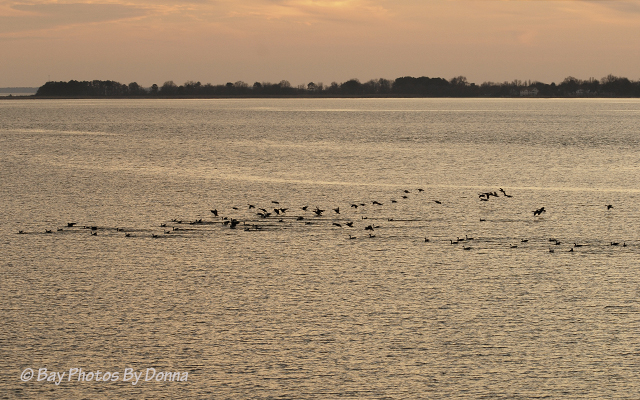 And each morning as they rise with the sun, they begin their honking and come swimming out of Marshy Creek, making their way to the open waters before taking flight for their day’s journey.  Yesterday as a group made their way past our osprey nest, some split off to follow a lead goose to investigate our cove.  The majority continued heading towards the Narrows. 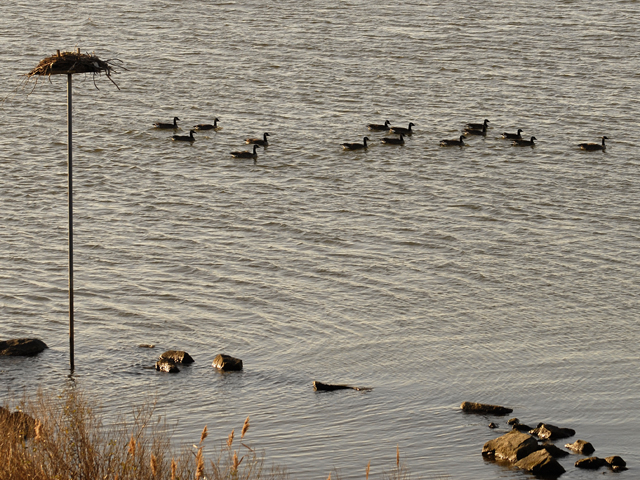 There was one particular goose who apparently didn’t like the other goose leading them in, so he went into high speed and passed the others to try to be the lead.

I lost track and can’t confirmed which leader made it first to perch on the berm to be the ‘looker’. 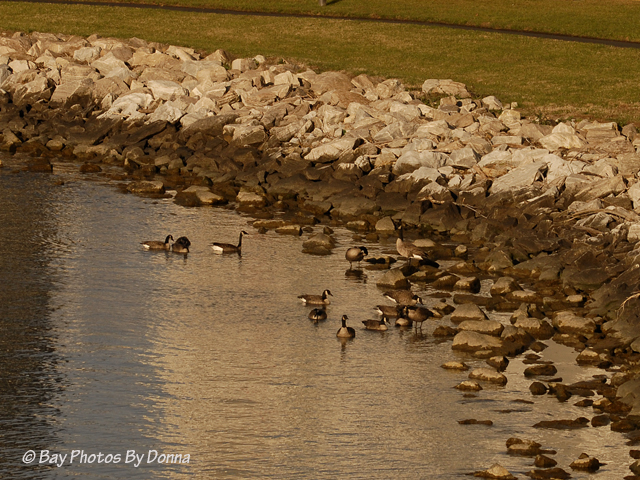 The larger group of geese began gathering closer and honking, which alerted the smaller group to head back out to merge back into the group.  And then they took flight! 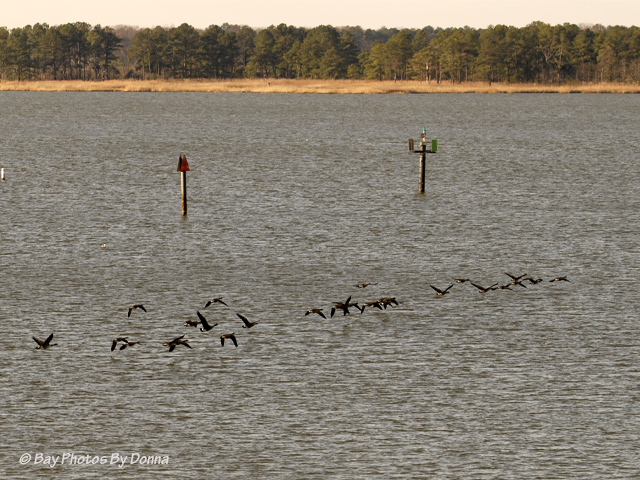 A male and female mallard traveling along at sunrise as the world awakens. 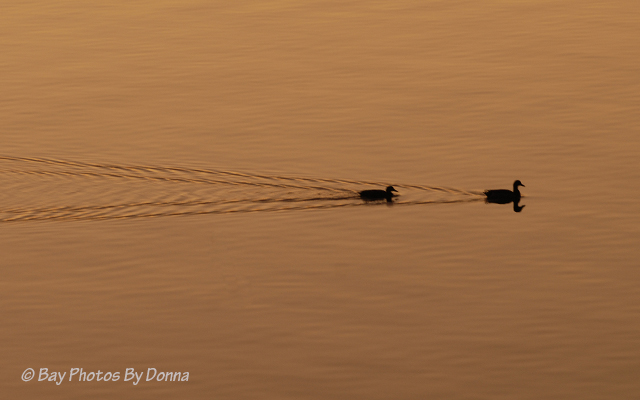 Finally, walking along our community path, I was in awe at the summer flowers that are still blooming.  The recent couple of frosts have definitely begun their damage as winter arrives, but there are still quite a few survivors.  Here’s a little brightness for your day!

Enjoy your week and as always, thank you for visiting my blog!

5 thoughts on “Along With The Geese & Tundra Swans, Those Cute Buffleheads Are Back!”