Life has me behind, more on that another time.  But FINALLY I’m able to post this exciting photo & info update on the well-known Osprey that reside above a mile-stretch of high-traffic volume on Rt. 50/301 (a dual highway with three lanes each side) here where I live in Grasonville, Maryland.  Last season, we had three active nests with attempts of two more that didn’t stay.  Three Osprey have already returned this season along that corridor, the lonely first one I sighted March 5th is still perching/eating daily on the sign and his/her nest, waiting for a mate to return.

First Osprey I sighted this season on March 5, 2013

And less than a quarter-mile west of that Osprey where Exit 44A actually occurs along with another sign, we have a mated pair that have returned.  I sighted the first one on March 14th and then saw both the evening of March 15th, each eating a fish.  I jumped off the ramp and headed back to them.   Cuz I had my cameras!!  🙂  YEA! 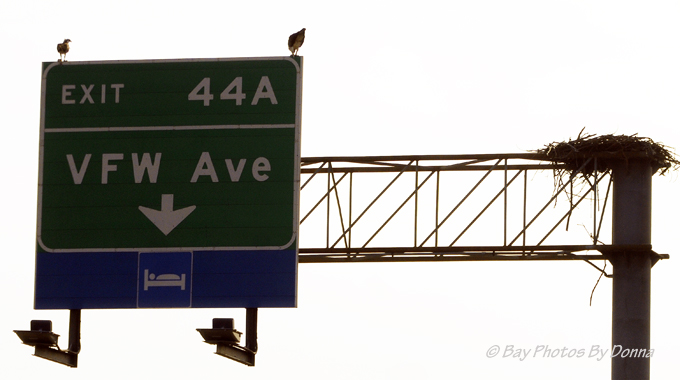 Osprey pair from the other side of the sign, facing west 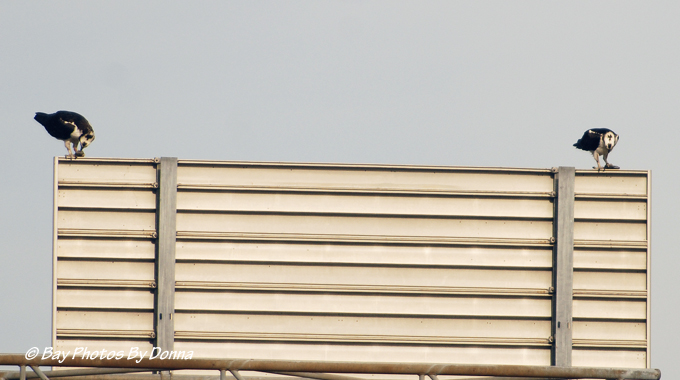 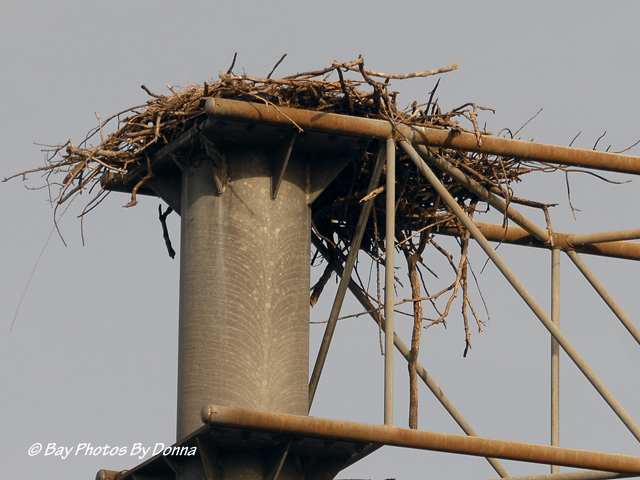 Their Maryland home –  it withheld the winter elements pretty good! 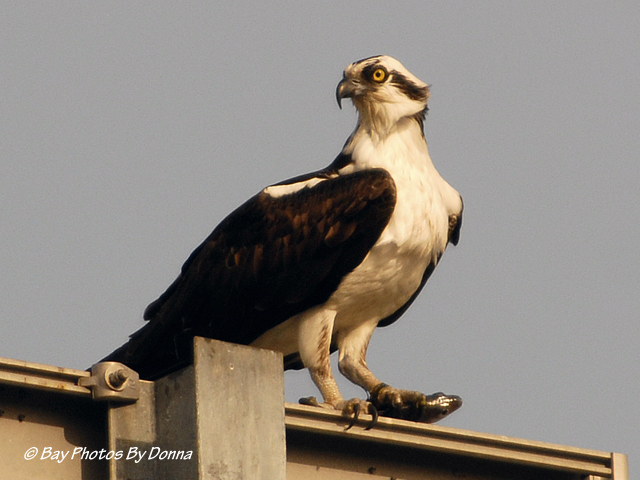 Mr. Osprey wasn’t so keen on my presence, while the Mrs. continued to eat and not care.  Mr. Osprey decided to see if he could force me to leave and left the sign with his dinner. 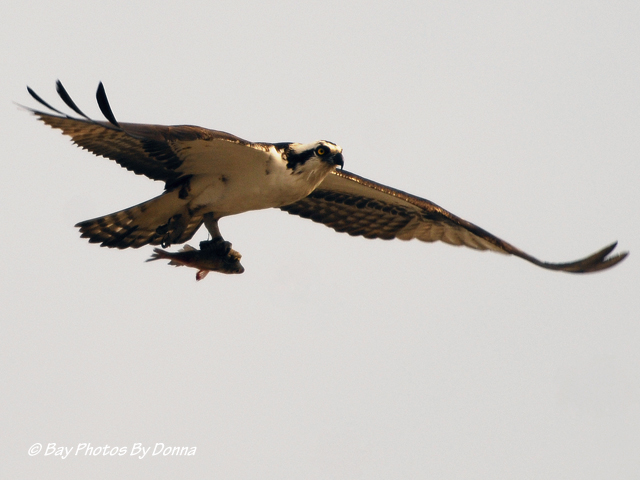 Mr. Osprey checking me out

Off to circle around again to try to get me to leave. Geez, what about all the cars and tractor trailers zooming below?!!

Mrs. Osprey keeping an eye on her mate 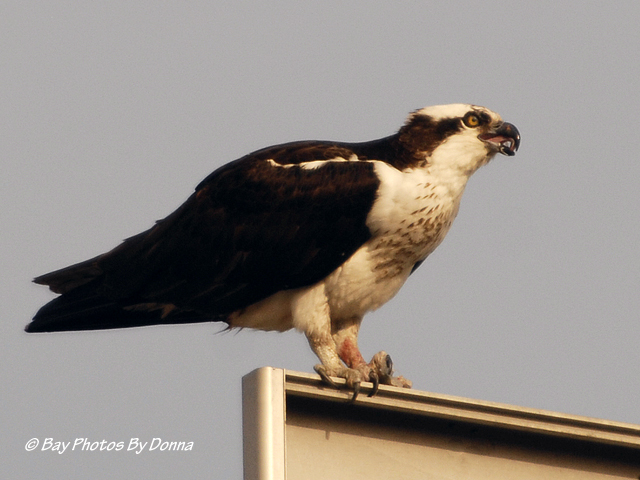 The Mrs. calling her mate back.

As the male circled back to land and the female resumed her eating, I took the cue to get back in the car and leave them to their dinner.  How rude of me to interrupt!  I have to tell you, I sure got my Osprey fix during those four minutes of photographing….

(Today all three Rt 50/301 Osprey are still there.  This morning, my husband and I literally gasped as we saw one Osprey swoop to the center of the dual highway (3 lanes each side!) to grab a stick and fly back up to the nest.  Through this September, I and many others will worry another season for these Osprey as they dodge traffic while gaining/dropping altitude.  So scary to witness….)

I headed home and drove past the Osprey Point platform closest to Rt. 18 to check on the pair I previously sighted and posted as No. 2 and 3.  They have wasted no time in starting to rebuild their nest that was lost over the winter.  A little sloppy so far but give them time!

Such Osprey excitement!  As I cruised my last mile home, I wondered if there were any on our Oyster Cove platform, the Kent Narrows channel markers where two more nests were active last year, or the two platforms I can see over at CBEC, all from my balcony.

I quickly checked and found our platform empty.  But I did sight an Osprey on the Kent Narrows South Entrance channel marker and two American Bald Eagles on the Prospect Bay channel marker (I need binoculars to see this one).  Both of these channel markers had active Osprey nests last year which are still intact.

No sooner than snapping those last couple shots, the Osprey left his channel marker and flew directly towards the Eagles, which one flew off while the second one had an aerial  ‘dog-fight’ with the Osprey.  What was the Osprey thinking??  It could have been two against one! 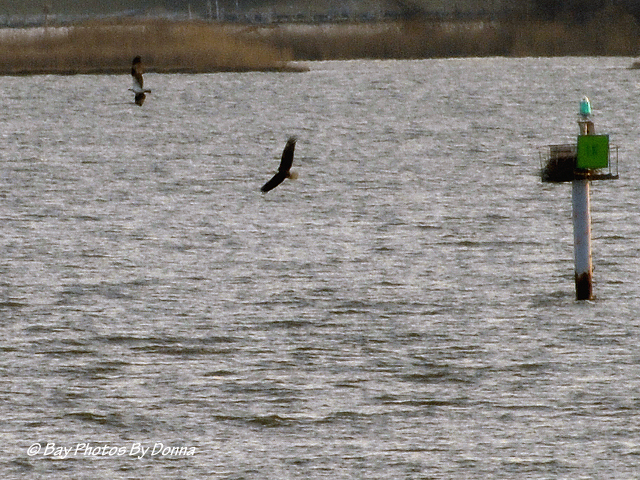 Eagle in pursuit of Osprey (note the size difference)

It really looked like it was more for fun than anything.  The Osprey flew back to ‘his’ channel marker while the second Eagle flew towards CBEC where his mate went.  The photos aren’t very clear since I’m so far away but it was exciting to already see and show interactions we have between the Osprey and Eagles in our area.

This past weekend was very quiet with the Osprey around Oyster Cove after so much the days before.  Saturday, March 16, I did finally see an Osprey on our lonely platform, the photo isn’t so great but evidence!  🙂  A male osprey came up from behind her and then they both flew off to Marshy Creek to the left where I’m guessing to the Osprey Point community platform where they are busily rebuilding their nest.  At least it was nice of her to stop by to say hi and give me a pose!   😉

Female Osprey on Oyster Cove’s Platform off my balcony

That’s the update of our area Osprey from my sightings.  Two other local bloggers have sighted and reported on them too, TheEasternBabe and  AChesapeakeJournal.  I guess you can tell us Maryland Eastern Shore locals get a little excited with the return of the Osprey.  We still have many more to arrive too.  We are fortunate that our Chesapeake Bay and its tributaries continue to increase in Osprey numbers each season, along with the American Bald Eagle.

Until next time, enjoy your week and thank you for stopping by!