Unfortunately, we still do not have any activity here on our Oyster Cove Osprey platform, but the well-known Osprey that have populated along the Rt 50 highway in Grasonville are busy.  There are now five Osprey occupying three nests.  I was happy to see the mate of the first Osprey that I sighted on March 5th had finally arrived.  She looks a bit ruffled but she made it!  They are both now protecting their nest and sign support.  Sorry on the images, it was just before sunrise so I had to lighten them up to see more detail.  Gave the poor fella a greenish tint on his back underside!

The Mrs who is glad to finally be home!

As I was photographing them, there was a commotion going on in a nearby tree with a flock of blackbirds.  It got the male Osprey’s attention. 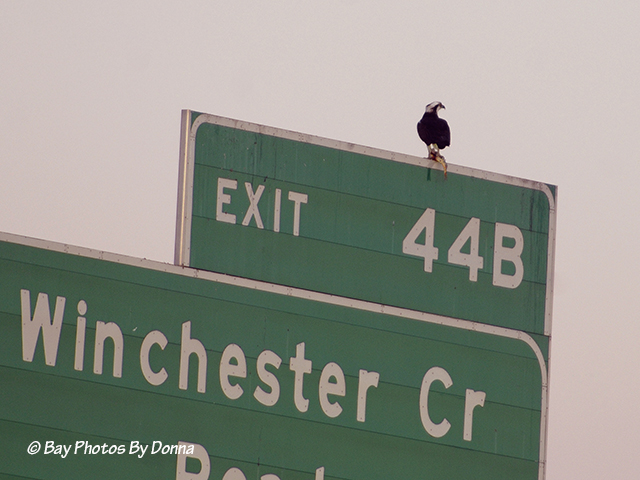 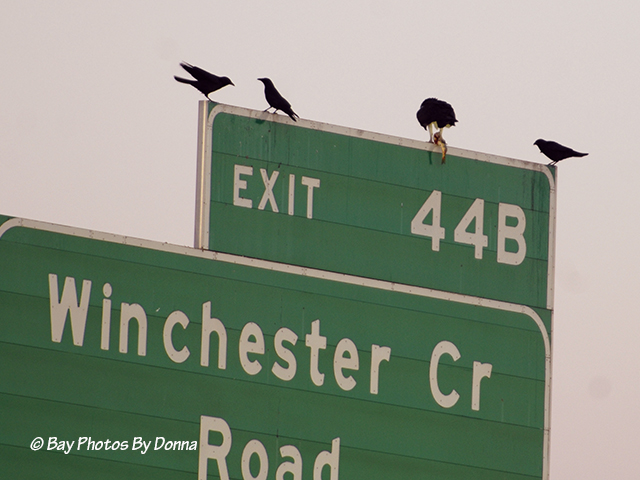 NOT!  The Osprey gave out a shout to them and up in the air they went.

Osprey giving the blackbirds a piece of his mind.

It didn’t seem to work as the blackbirds re-landed.  This time the Osprey was louder.  Which definitely worked; they all flew back to the tree and perched quietly. 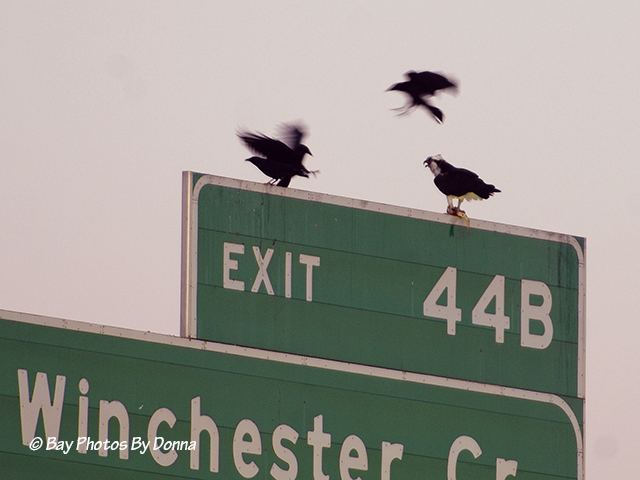 He looked at them, then at the Mrs. who was watching the whole commotion, and then back to his meal.  I had never seen blackbirds come so close to an Osprey, let alone while he’s eating, I was surprised with their fearlessness and the Osprey’s calmness.  An Osprey does not appreciate other’s company except his family!

Another photo, this one of a truck passing underneath him as he enjoyed his fish.  The nest and the Mrs are just to the left in the photo.  You can see how dangerous it is around the Osprey and why us locals worry for them!

On Saturday, I spotted a fifth Osprey perched on a third nest that is on the eastbound side and was new last year.  This third nest took that Osprey pair all summer to make it.  Both storms/winds and the difficulty of trying to get a solid base going that could withstand the weight of the nest played havoc with them, but they persisted.  With all that hard work, they missed their window for mating.  They had no time!  The past mild winter spared a lot of damage to the nest, so if this Osprey’s mate returns, they’ll have much less work this year to start the season.  I haven’t been able to photograph it this season but here’s shot of it from last summer.  You can see the number of sticks that kept falling through as they tried to keep the top nest intact! 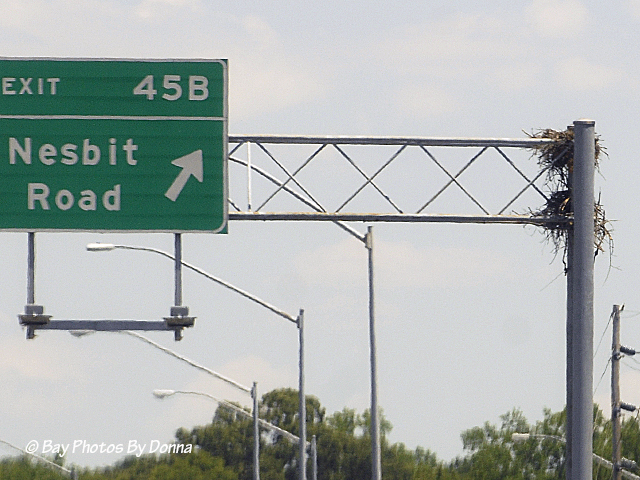 Besides the Osprey on the distant channel markers close to us, we’ve had some other great feathered friends visiting around our Osprey nest platform, keeping us happy with their entertainment.  I hope to post some photos of them in the next couple days.  Until then, I appreciate your following my blog.  Have a great week!