Please excuse the long absence, my mom didn’t bounce back so quickly from a scheduled surgery; she’s much better now!

Of course, Oliver and Olivia haven’t slowed up one bit in my absence.  What a change in the nest!  And the trashy decor, lovely!  🙂  Our pair of osprey have proven a love for plastic and continue to use it to secure and tighten their nest.   I took a photo of the nest late Saturday night when I returned for a quick refuel, Oliver was checking out his work… 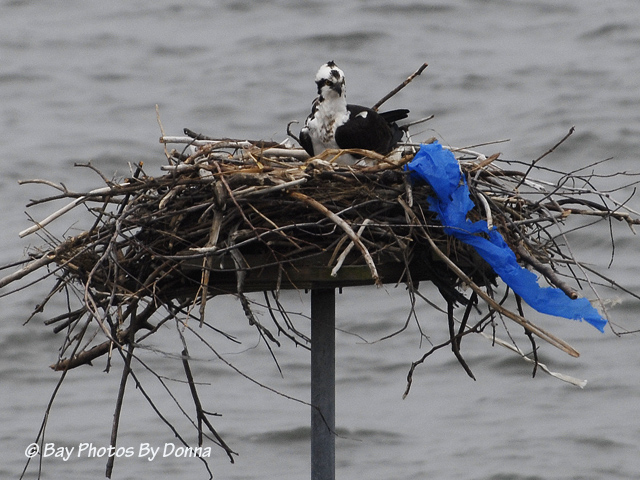 Seeing he needed more, he took off for another stick and head back.  I loved the next shot of Oliver coming across our community property, my first with our osprey and daffodils in the same photo! 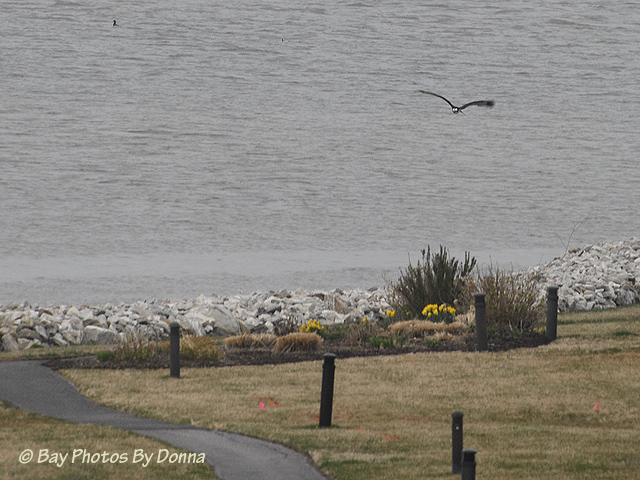 Early Monday morning, I found Olivia perched and keeping an eye on her surroundings…..and possibly looking for Oliver. 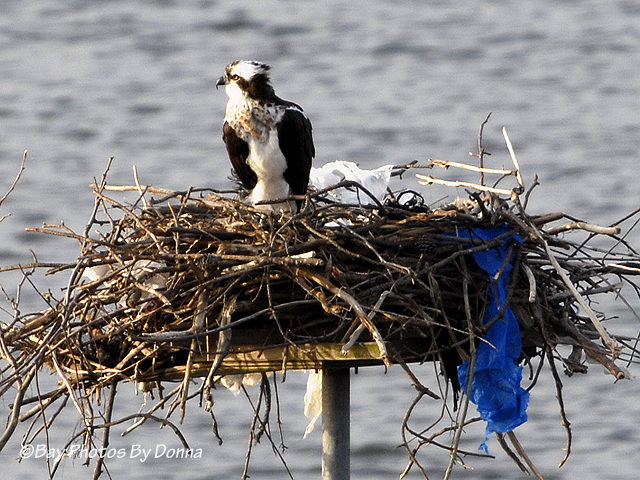 She must have known, as here came Oliver with a small fish that he offered to her to eat.  Such a great mate! 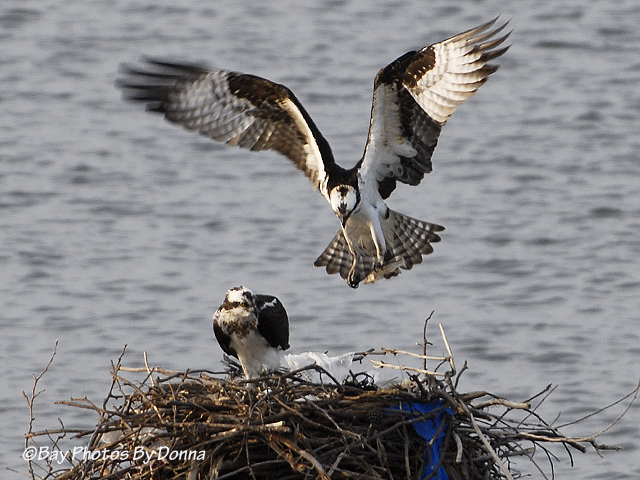 By Wednesday, the plastic is starting to disappear within the nest of sticks.  Let’s hope it stays deep and doesn’t get entangled with our osprey.  This next photo has Olivia on the right and Oliver on the left.  Another good shot to see the size difference between the two. 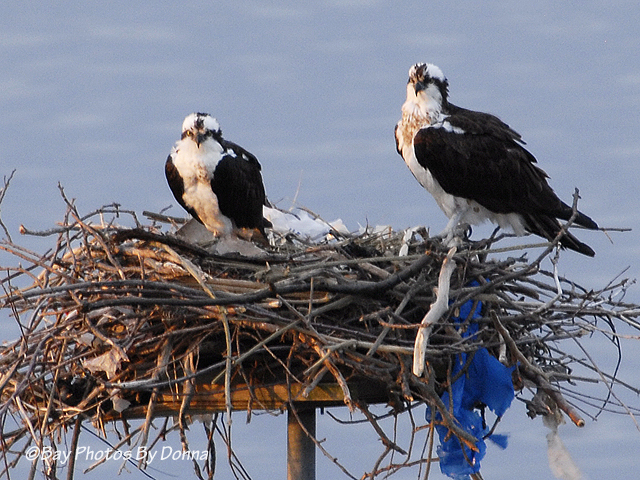 Another shot of the nest and trashy decor….. 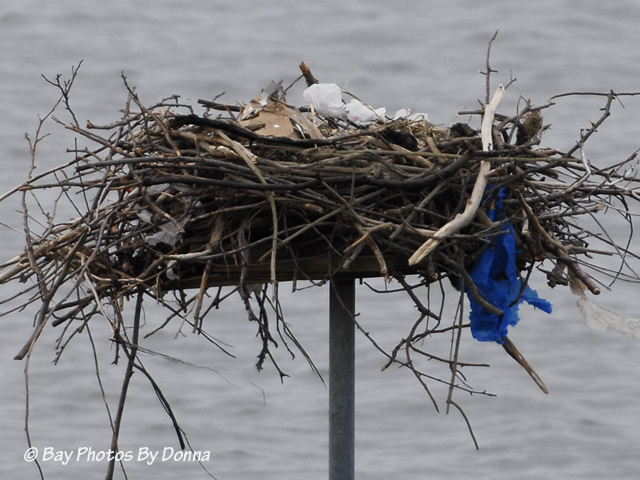 Work does not cease for Oliver.  This morning in the drizzle, our osprey pair rested on their nest; although Oliver would readjust a stick or clump of grass as he saw fit. 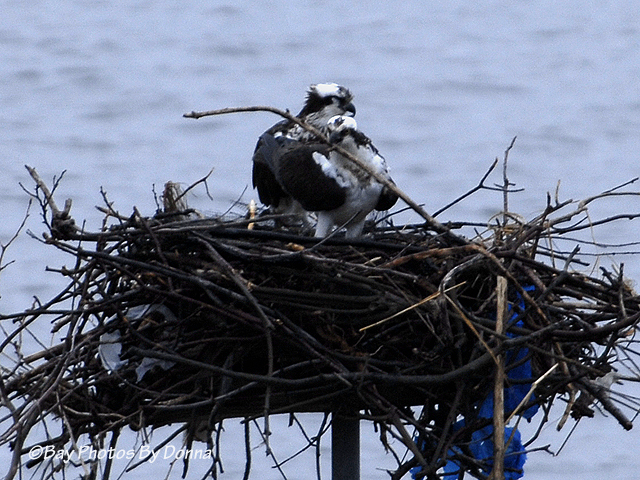 When he departed, I noticed a new addition of trash to the nest behind Olivia.  The first photo shows the nest to date.  Second photo is a close-up showing a piece of screen.  Not a good addition to the nest I would think. Unfortunately, osprey in general will use just about anything to build their nest.  It’s been recorded that in addition to plastic and fishing line, they’ve used a hula hoop, toy boat, barbie doll, rag doll, and a wallet.  Wonder if that pair got lucky and found any money??  LOL 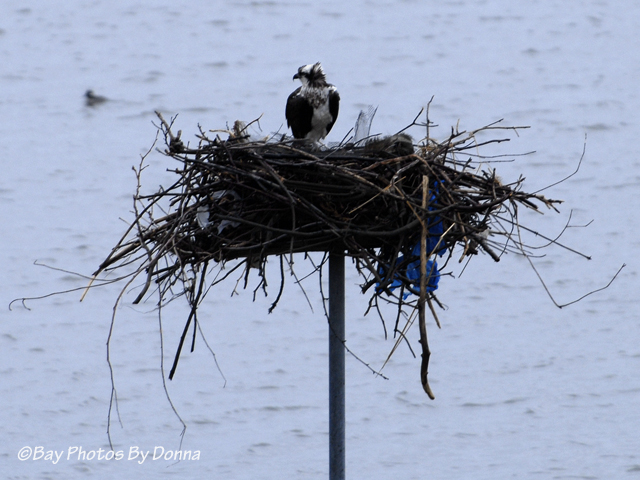 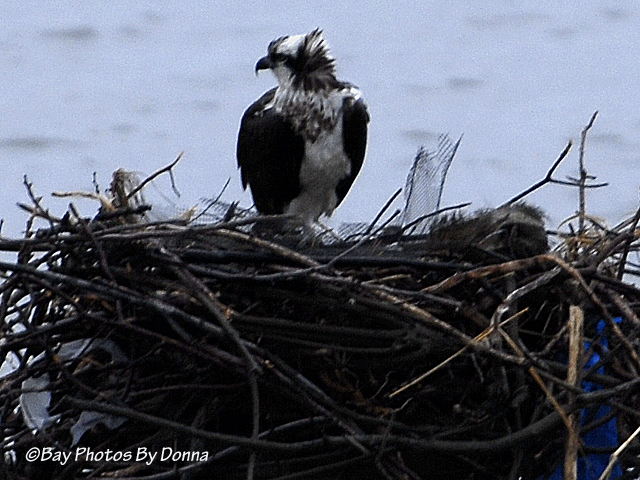 Finally, I wanted to share a photo of a northern shoveler who flew in with eight mallards to feed at the bottom of the nest.  The mallards were quite verbal letting the shoveler know they didn’t like his presence.  They left him and he swam off in another direction.  First time I’ve seen a northern shoveler around the nest. 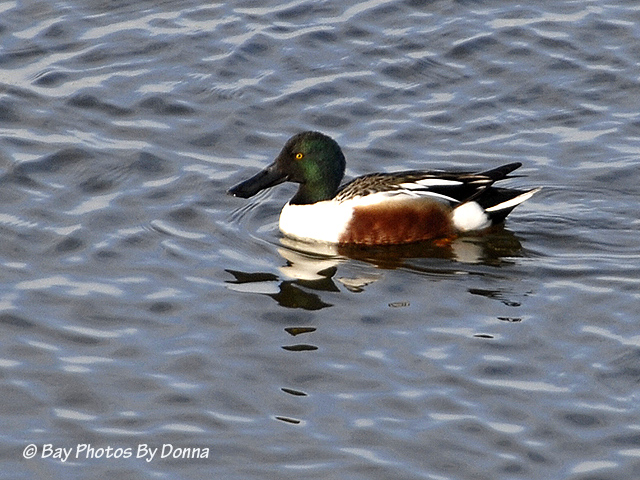 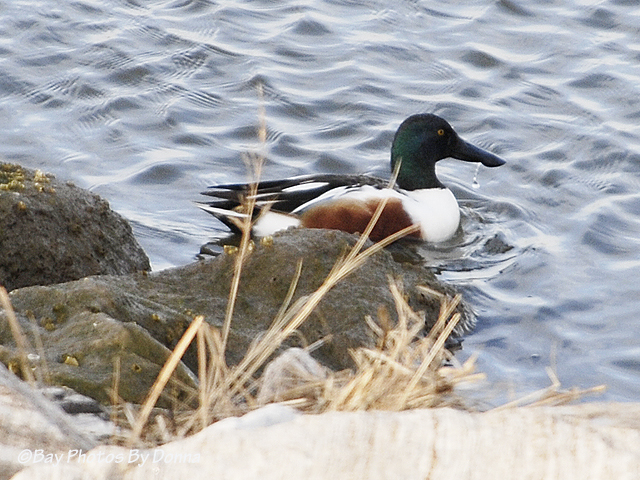 That catches us up to date.  Last year around April 6, I noted Olivia became a permanent fixture on the nest, only getting up and leaving when Oliver appeared and replaced her, indicating an egg had been laid.  In another week or so, we should expect see this occur.  And then the excitement begins as we watch for little chicks peaking out to their new big world!

Have a great weekend!