I was really hoping that by not posting for a day would give the time to allow things to change for the better but it hasn’t for our Oyster Cove osprey nest.  😦

Both last evening and tonight I vigilantly watched the osprey activity that was occurring in my immediate area.  If, and we hope it is Oliver and Olivia who appeared to return to our nest for a couple days, visiting it, inspecting it, and watching it from Lippincott Marina’s channel marker, giving me strong impressions they were a little leary, maybe spooked by the nest they abruptly left a month early last season.  The activity on the new Osprey Point nest platform is constant, with periods of rest on Lippincott’s marker.  But no venture to our nest that I’ve seen.  I cannot tell if any nesting material has been brought to the other platform just yet.  Here’s a photo from this day last year of the progress Oliver and Olivia had already made after arriving a day later than this year.

I just previously said “we hope it is Oliver and Olivia who appeared to return”.  It’s just nice thinking that they survived to return yet another year!  🙂

In the distant, the Oyster Cove community can now hear osprey calls.  There are others that have also returned.  In the last couple days, a female has shown up on the south entrance of the Kent Narrows Channel Light 3 Green.  She’s been there constant since I first saw her, perching, eating fish, and even making threatening calls at flying intruders.  Then I watched this boat quietly return last night at 6 pm and I didn’t hear a sound from her, she just watched it go by.  I followed the first shot with a grainy close-up so you could find her.

So whether another osprey pair occupies our nest or we just have nest ‘visitors’ this season, we’ll not fret on Oliver and Olivia’s decision to relocate.  There is a reason why they did and we would want them to go by their instinct to stay safe if so be it.  Best of luck to them and I’m sure I’ll be sharing photos of them visiting our nest if another pair doesn’t!  🙂

And that means if my osprey blog doesn’t have an osprey family to document and follow daily as I’ve done the past two seasons, I’ll have to continue to inundate you the other photos of birds and wildlife I’ll now have time to share this summer!

With that said, here’s a round up of my best captures this past several days of some of our other feathered friends in my backyard.

The American coots are here feeding every evening.  I keep thinking it’ll be the last night before they forge north on their migration.  And luckily before leaving, they came real close to our berm and then rounded the osprey nest to head out, giving me some great close-up ops. 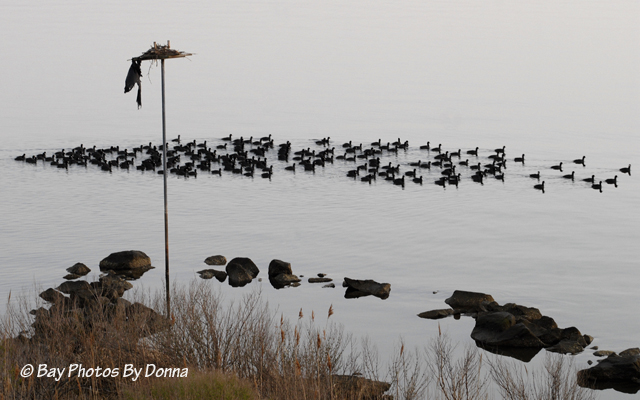 I’ve also seen a pair of mallards quietly investigating the bushes around us, looking for a safe spot for nesting.  Here’s the Mrs giving me a striking sunrise pose. 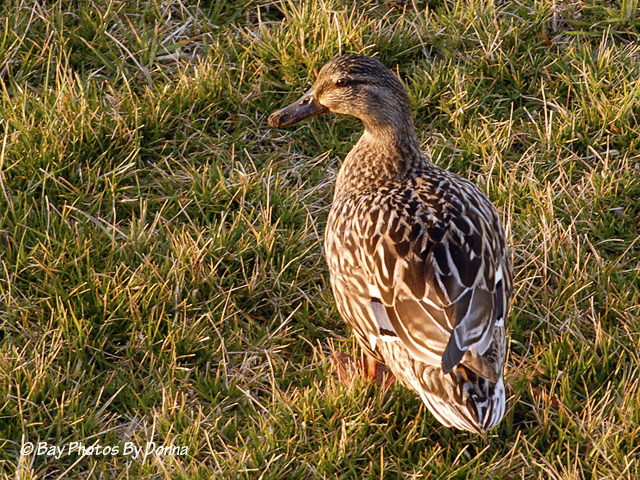 Another day, these fellas were enjoying a sunset.

The American robin is abundant in the community, so I have no problem locating one from my balcony as they scurry around keeping control of their little area.

Not often but coming through our community are small flocks of common grackles (blackbird).  Here’s one that posed on one of our walk-way path’s light, followed by one doing what appeared to be a mating-attraction dance for another grackle.  He didn’t succeed. 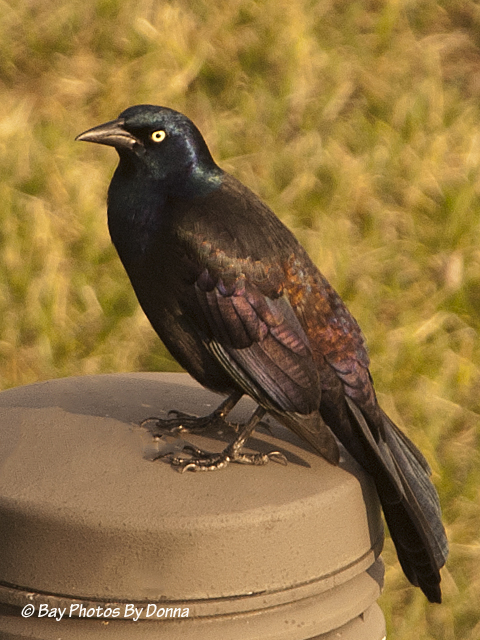 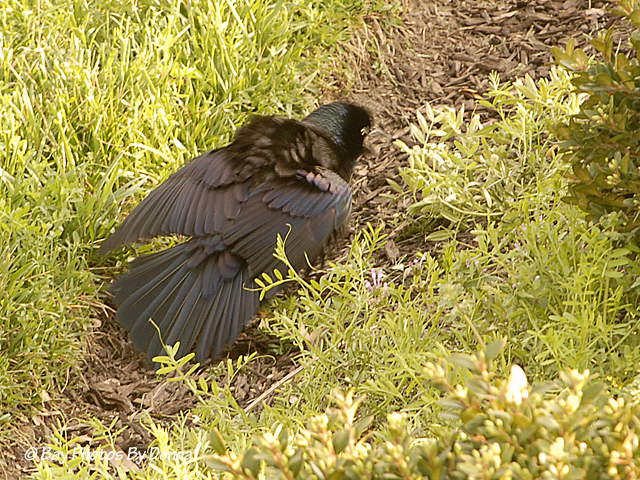 Grackle trying to attract a female

A couple I threw in of him giving his “Angry Birds” pose. 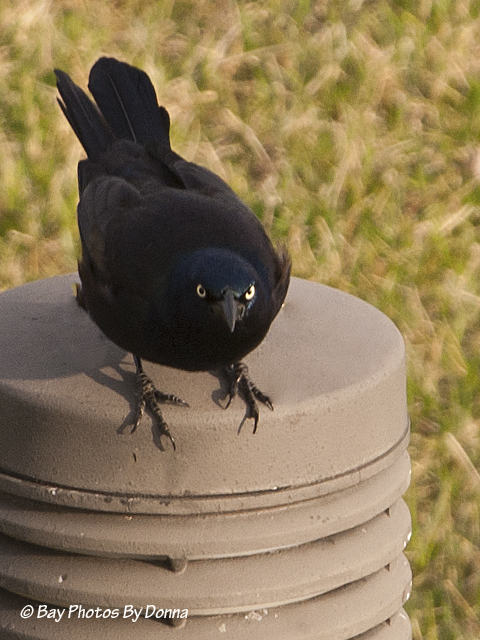 Finally, three shots of a herring gull who told the world he was on the osprey nest.  And maybe trying to cheer us up pretending to be an osprey for us.  😉

"Herring gull pretending to be an osprey" 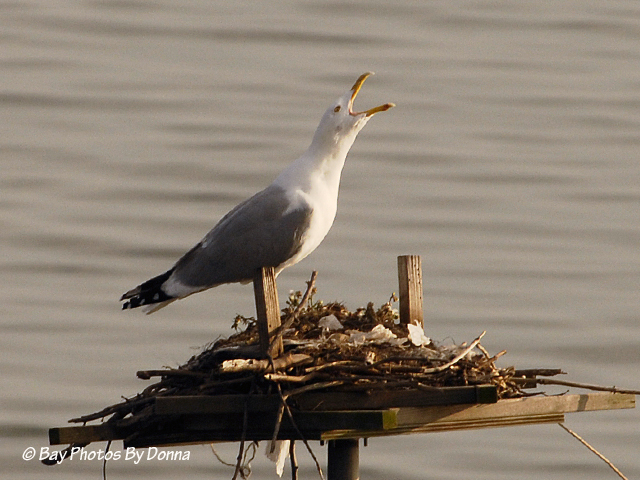 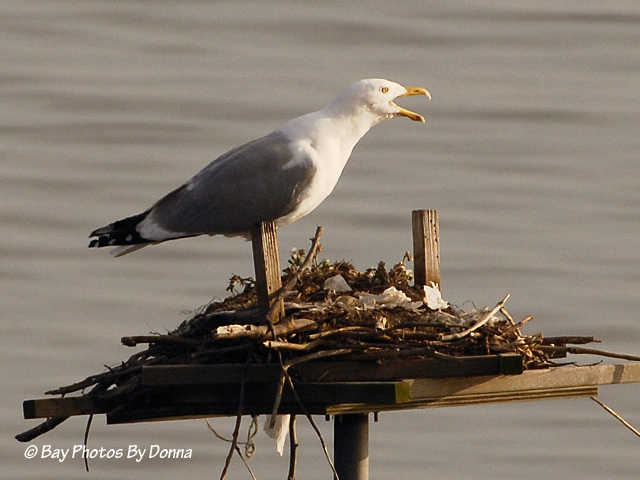 Well, that’s the latest in our osprey saga.  Thanks for following and visiting, and I know I can continue to share some wonderful photographs of the birds, wildlife, nature, and landscape captures throughout this season.  Oh, and there will still be osprey photos once I get water-mobile, actually that’s when I’ll be able to give some really great close-ups of our area’s other osprey!