This post will bring us up-to-date from my last post on an Osprey pair who had shown perseverance on attempting to rebuild their nest on our Oyster Cove osprey nest platform after the severe weather had blown it off.  This first photo shows almost double growth on April 14th from the previous day of the rebuilding.

As if it’s not enough to have to start again on buildling, our Osprey pair still had to defend their nest from another local area Osprey that lives over on the Kent Narrows South Entrance Channel Marker #4.

Our Male Osprey taking off after the other local Osprey

The other Osprey retreated to his home and ours returned as if he was proud at what he’d done!

Well, that was early in the day of the 14th.  Later that evening, I was shocked at what I witnessed.  The male Osprey from the KN Channel Marker #4 flew over to our unprotected osprey nest platform, swooped down, grabbed a large stick, and bee-lined back to his nest, the stick dragging along in the water!  That STINKER!

Osprey from KN Channel Marker #4 flying off with a stick from our OC nest platform!

Other Osprey arriving ‘home’ with our Osprey’s nesting material.

That may further explain why our new Osprey pair have been having a heck of a time trying to build a nest, neighbor Mr. Stinker Osprey may have been taking from ours all along and adding to his noticeably well-built nest.

The Osprey pair on that channel marker I believe are the same pair from last year.  I noticed they reunited quickly and immediately rebuilt/repaired their nest from last season.  And just as quickly the female was sitting low in the nest, incubating eggs.  Several weeks ago, I could see with my binoculars it appeared little ones were being fed periodically.

The day after I witnessed the ‘taking’, we went for a boat ride and passed by the Osprey pair as we passed through the Kent Narrows markers.  This pair is quite use to boats passing within just a few feet of them as there’s little room otherwise.  I took a couple shots while we cruised on pass Momma feeding her babies. 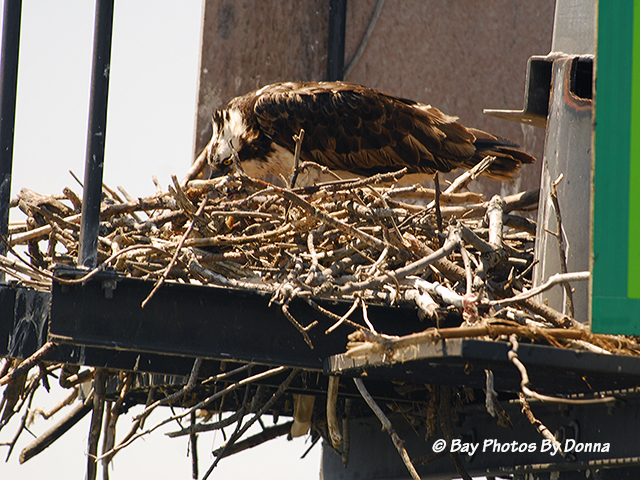 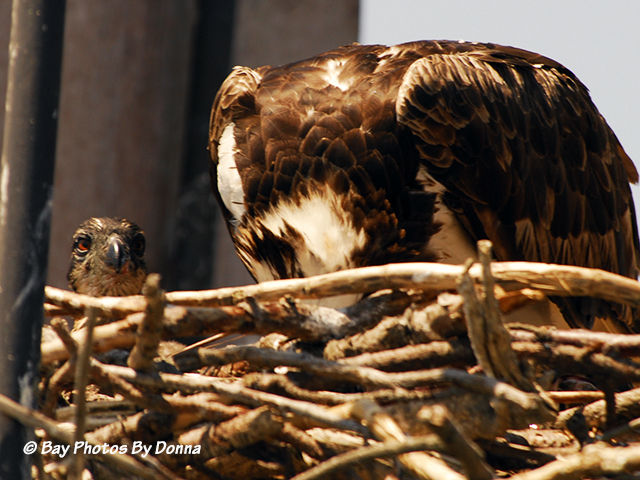 Momma Osprey feeding a chick while the other one gives me a pose.

Awwwwww…… 🙂  Okay, so daddy Osprey really does need the extra sticks to build that nest larger to keep those little ones within!  I saw two chicks total.

Later in the day when we returned, I took a few more photos of the family.

On watch while the chicks were up and about. 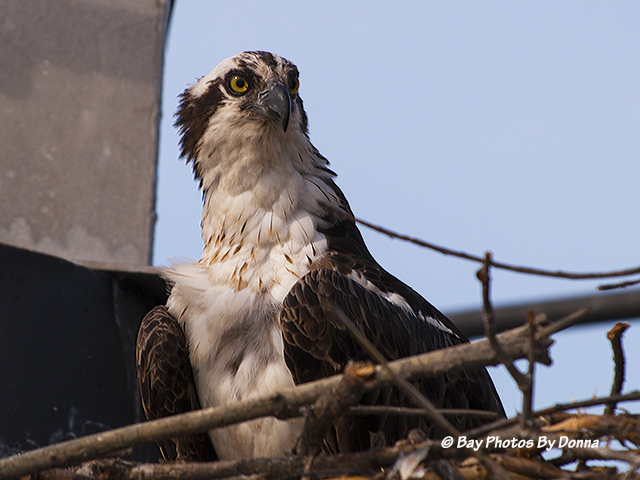 Keeping an eye on us but never a peep or noise.

I’ll be trying to get some more photos of this family and the chicks as they grow!

This Osprey family is exciting but our nest platform is not so.   The sticks and nesting materials, or lack thereof, continued.

When I got home that evening, it looked like the other area male Osprey had ‘visited’ again and took basically the rest of the sticks.

On the 18th, we had a lot of rain.  That evening those last couple measly sticks were gone.  Yesterday and today, I’m finding no sticks on the platform and ‘our’ Osprey pair are either perching over at Lippincott’s channel marker or are no where in sight.

I can imagine they are quite discouraged this season.  I know I am for them….   😦