This Osprey Pair Doesn’t Give A Hoot

This post is primarily to document Osprey behavior that I thought interesting and a bit funny.  I’ve wanted to get back and capture more shots with better lighting but haven’t had a chance as yet.

Although they do nest over land, Osprey are most comfortable nesting over water, and the higher the better to get that 360 degree view.  One of the Osprey’s major threat & fear is the Great Horned Owl.  The GHO will snatch an unguarded Osprey chick like a ghost in the night.   😦

This season an Osprey pair has nested on top of a dock piling driver that anchors in the small inlet alongside the Holiday Inn Express at Kent Narrows Rt. 50 Exit 42.  As you ramp off Rt. 50, it is off to your right as you pass the water.

At the start of the nest building, the owner removed the Osprey nest when the driver was moved out of the area.  When the driver returned, the Osprey were waiting and quickly built another nest.  For some reason, they insist this is home.

I see this nest every day; and on a quick stop in mid-April, I took a couple of photos.

At the water’s edge, I could see what appeared to be an attempt to discourage the Osprey. 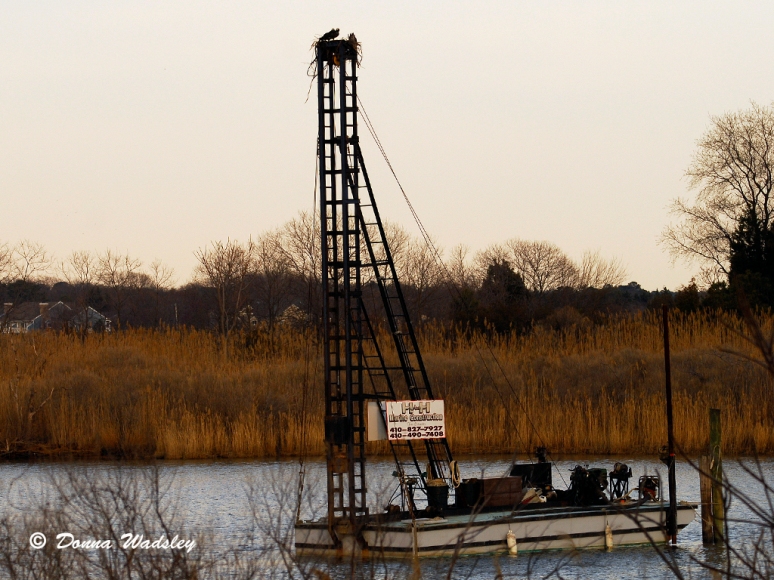 Osprey Pair and their home

Osprey pair and their tenant, a fake owl

It was like a stare-down, with no one moving.  LOL

Since then, the female appears to have settled in the nest and is incubating eggs.  A few mornings ago, I got this silhouette capture.

An Osprey incubating eggs with her fake owl buddy

I’m hoping the driver owner will not destroy the nest but I fear they will need to move and use the driver.

If luck has it and the nest remains, then that means the Osprey will be looking at that owl for the rest of the season, day in and day out.

Obviously, this Osprey pair doesn’t give a hoot!

12 thoughts on “This Osprey Pair Doesn’t Give A Hoot”