Big apologies on another long absence, my mother had complications from her surgery and was back in the hospital a day after my last posting; she just got back out, and we’re hoping on the road to recovery for sure this time!  🙂

I still kept an eye on Oliver and Olivia when I could.  By now, Olivia should have produced more eggs if she’s going to.  I’ve seen the “changing of the guards” several times, when one leaves while the other gently positions over the egg(s) to keep them warm and protected, and have watched recently the parent leaning down and pushing towards their middle all while spreading their body to straddle the clutch.  I’m thinking all this extra ‘work’ to position means we’ve got at least two eggs.  We hope!  Here’s a photo of  Oliver working to position over the egg(s). 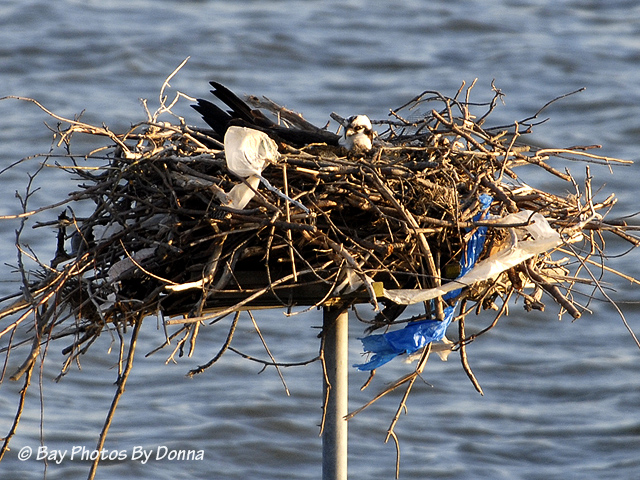 In the following three photos, Oliver had just delivered a headless fish for Olivia who quickly is up and grabbing it.  And as usual she departs with her meal, this time in her mouth but quickly works the fish down to her talons while she flies away. 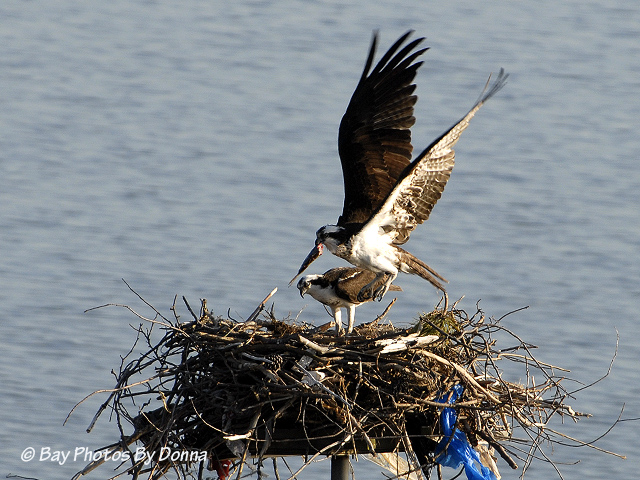 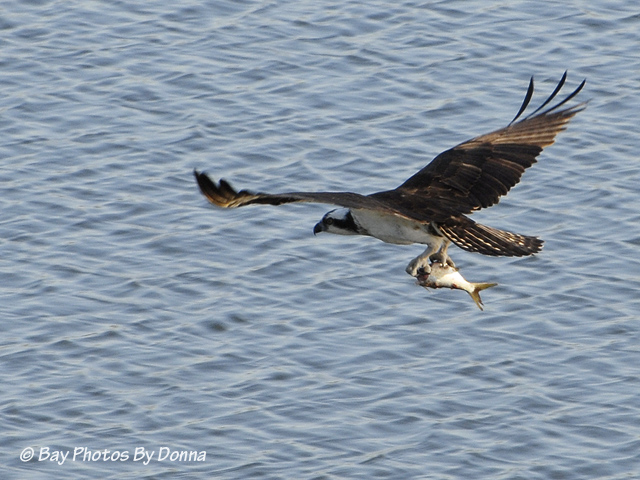 Oliver and Olivia are such a great pair, devoted to each other as they work together to protect their upcoming offspring!

No matter how few minutes you have, our waterways always provide ‘something’ to watch and experience a peek into a life of nature.    Those cute buffleheads continue to visit daily.

Coots are also still around.  These coots were busy diving and eating while the sun was setting.

For the last couple weeks, I’ve noticed a small flock of large, swift-flying gull-like birds, that were diving for fish in spectacular plunges.   Hopefully, some of you have seen them.  They are northern gannets and were most likely migrating through to Canada where they breed.  They weren’t easy to photograph but here’s a photo of one.

I’ve seen several more sightings of otters early in the morning, the last couple times there were three.  They come from Marshy Creek and quickly swim clear across Kent Narrows channel towards Kent Island where I lose sight.  Here are some photos from early this morning. 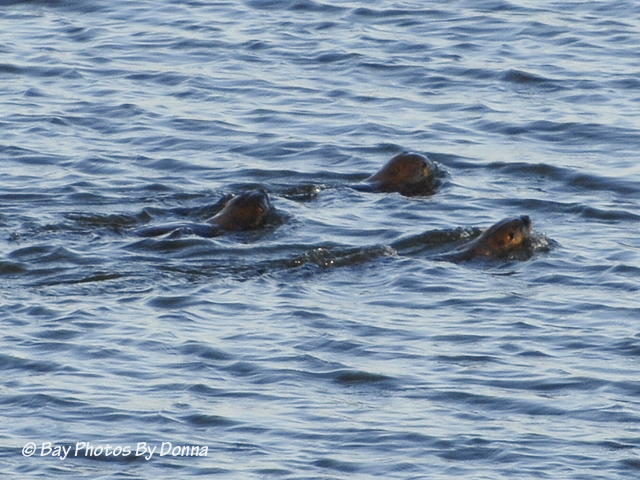 This evening I just happen to step out on the balcony and couldn’t believe three otters were just passing our osprey nest and swiftly swam back towards Marshy Creek.  Again, always something to see out there!  🙂     Update:  I had stated previously the photos showed beavers but I contacted Judy at CBEC for her expertise, and they are indeed otters!   Per Judy,  CBEC has two pairs (who produce young every year) on the property.  Both pairs live in Marshy Creek area, but travel across to Oyster Cove and all around the peninsula.

Finally, just wanted to share my 5-minutes of fame, LOL.  If you receive the magazine, What’s Up Eastern Shore, the following April issue is now out.  The log canoe racing on the front cover is my photo!  It won second place for their Fun On The Water photo contest but I got the coveted front cover spot.  Isn’t that cool??!!  🙂

Hopefully I’ve caught us up on the life of our Oliver and Olivia as they protect their nest and their precious egg(s) from the weather and other predators while they (and we!) wait for the hatching early in May.   I bet they have more patience than we do!  🙂