Oliver and Olivia Are Safe!

For those of you not within sight of the osprey nest, I just wanted to pass on that Oliver and Olivia are safe and secure, having endured even more violent thunderstorms and winds than a few days ago.  The last three days of constant winds of 20-30 mph (and gusts over 60!) have kept Olivia low in the nest while the platform pole has swayed back and forth a bit.  In the midst of it all, Tuesday evening, Oliver decided to have some fun and did some wave-skipping!

And then up Oliver soared, giving himself a good shake-off in the process.  With the warm, humid temperatures, I bet it felt good!

As the storms headed our way Wednesday, Oliver was busy working on strengthening the nest, a never-ending job it seems.

And then today’s storms hit.  I was not around but watched the weather radar and saw our area hit continuously by storm cell after another.  Some hitting direct were packing 60 mph winds.  And I worried about Oliver and Olivia and their nest.  Would it be able to sustain the impacts I was watching?  I had watched in horror late last summer a well-established nest over at CBEC along Prospect Bay just disappear in seconds from a violent storm (luckily the chicks had fledged!).  This evening to my amazement and relief, the nest was fully intact and I saw Oliver and Olivia within minutes.  🙂 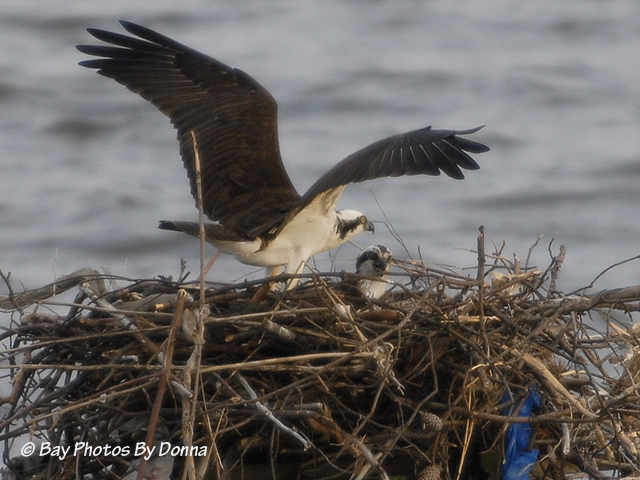 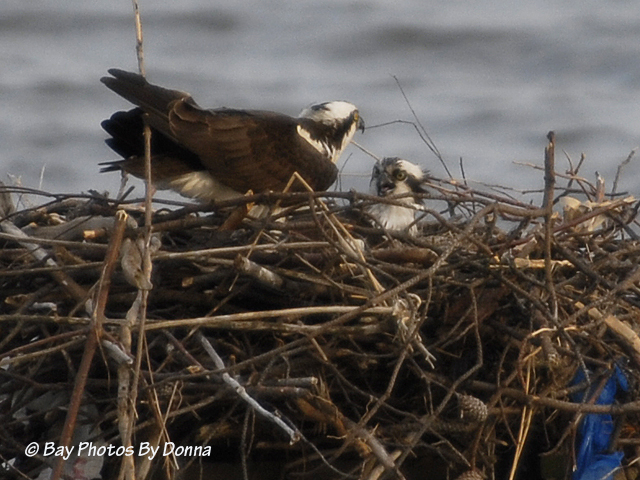 Just before dusk, the sun broke through a small clearing.  I got a shot of the whole nest, still intact, proving Oliver certainly is one excellent architect!

One last thing I wanted to mention, we had an altercation at the nest this evening between Oliver, Olivia, and another osprey.  Olivia was up and had started to let out loud warning calls, which got my attention.  Oliver’s too as he came out of nowhere and was on the nest also screaming.  A third osprey came down to the nest and immediately Oliver and Olivia were trying to attack it.  The intruding osprey flew up and away, heading over to the Kent Narrows channel.  Oliver and Olivia both stayed on the nest, chattered some more, and then Olivia settled back down on the clutch.  I have noticed on the KN channel marker 3, another pair of osprey have started a first-time nest.  In the last couple weeks, it appeared that one was constantly on the nest, possibly incubating an egg(s).  I’m wondering if the intruding osprey was from that marker, as that pair has continuously flown over our nest and then a chase usually occurred, chasing the young pair back over to KN.

Let’s hope those nasty storms are over and more comfortable temperatures are on their way.  I’m sure Oliver and Olivia would agree!

2 thoughts on “Oliver and Olivia Are Safe!”