Osprey Chicks To Fly Any Day

I am surprised we haven’t had an osprey chick fledge yet as of yesterday, but the last couple days have lacked the breezes and winds they love to practice in.  On Saturday we did have breezy conditions, and I watched some impressive 1-2 foot lift-offs, then dropping back down quickly.  I created a quick video of a sequence of 24 photos of one such lift-off that day.  You will see towards the end of the video, she gets a little squirrelly but brings it back together and down.  Also notice the extended talons are always ready and reaching to grab hold of the nest if/when necessary.

On Sunday evening, we were lucky to only get clipped by a large thunderstorm cell passing over Eastern Bay and Tilghman’s Island.  With the rain & windy conditions, our chicks were taking advantage of some more lift-offs.  I was trying to capture the storm crossing the bay when I saw one getting quite air-born.  Had me worried for a while that the winds would whisk one of our chicks away by accident! 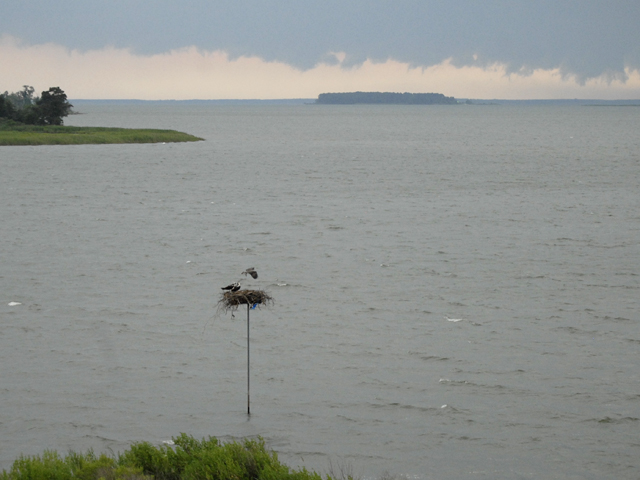 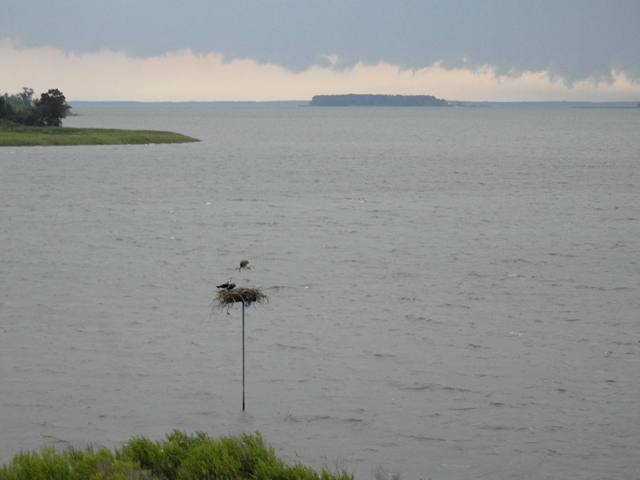 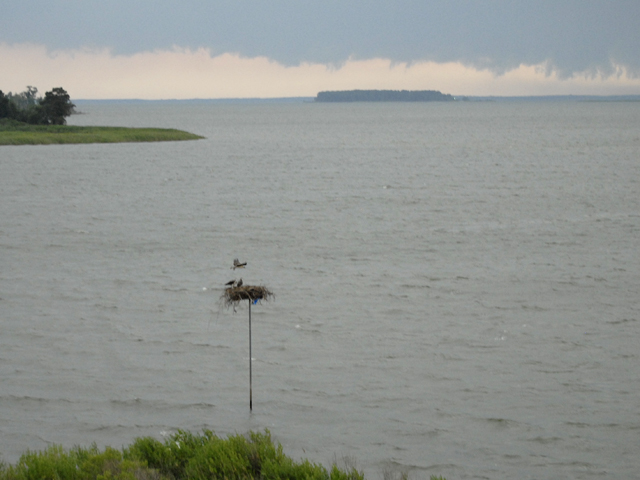 The temperatures have climbed back up and the humidity is back.  (YUCK!)  This past weekend I watched Olivia leave the nest a few times, primarily to skip along the water or totally immerse herself to cool off.

When Olivia returned from one dunking, I captured some great shots of her on the nest puffing and spreading her feathers to air them out.  Her family looks on as Olivia strikes some beautiful poses! 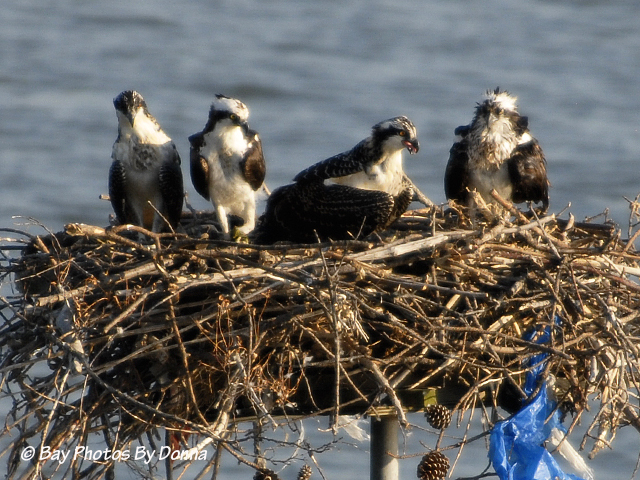 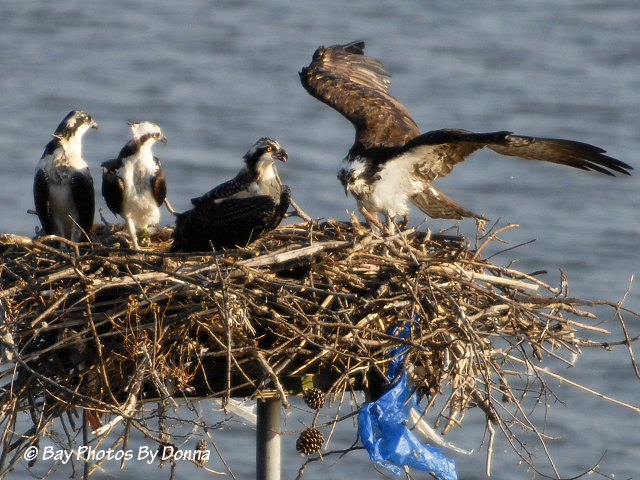 Now at 9 1/2 weeks old, our full-grown chicks are becoming more aggressive as they learn what is necessary to be on their own.  The next few photos show one of the chicks being quite vocal at a passing bird while mom continues to feed the other.  Olivia did immediately check out what the chick’s alert was all about but found it not to be an intruder so she continued to feed while ignoring the ruckus. 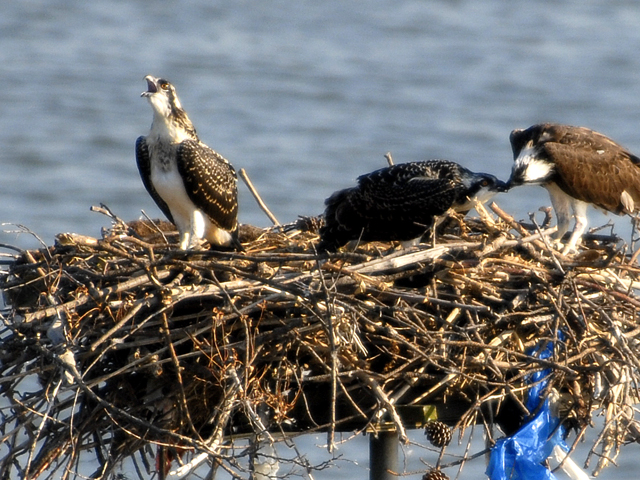 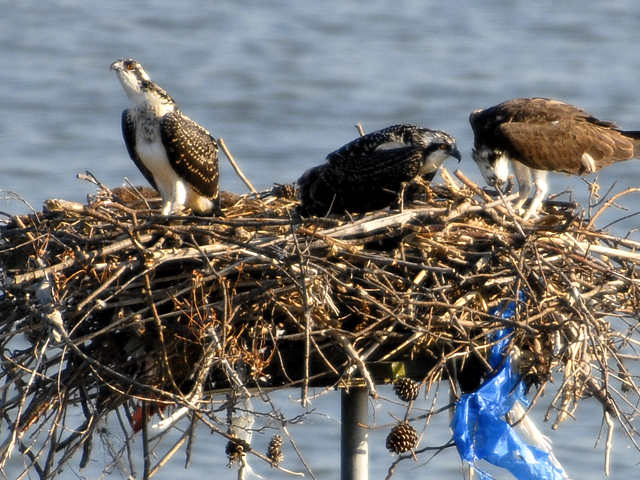 In that last photo, the chick is giving the ‘that’ll show you to come around my nest’ look.   🙂  Another series of agressiveness photos follow, these were yesterday at sunrise so the photos are grainy but it was quite comical to watch and I wanted to share.  Now when Oliver drops a fish delivery, the chicks will attempt to try & pull a piece of fish off while mom is feeding the other.  This time Olivia allowed one chick to take the fish, which the other chick wasn’t too happy about.  So a tug-of-war began between the two.  Mom kept her eye on them. 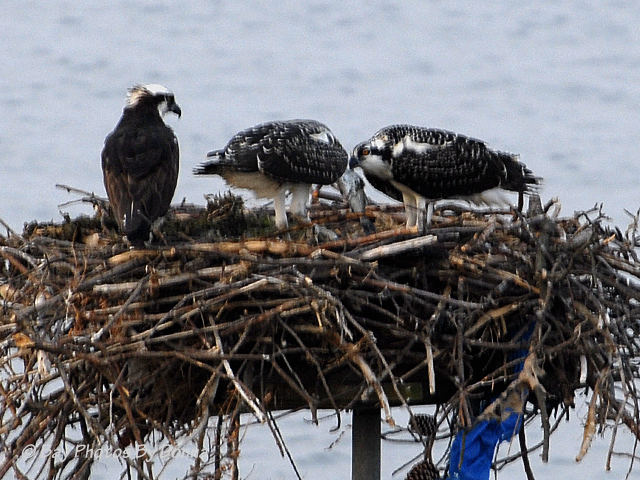 Since the tug-of-war wouldn’t stop (poor fish!), Olivia took the fish back with both chicks quickly surrendering it.  She ate a couple bites herself while they watched, and she then began feeding them.  Her chicks have become normal teenagers! 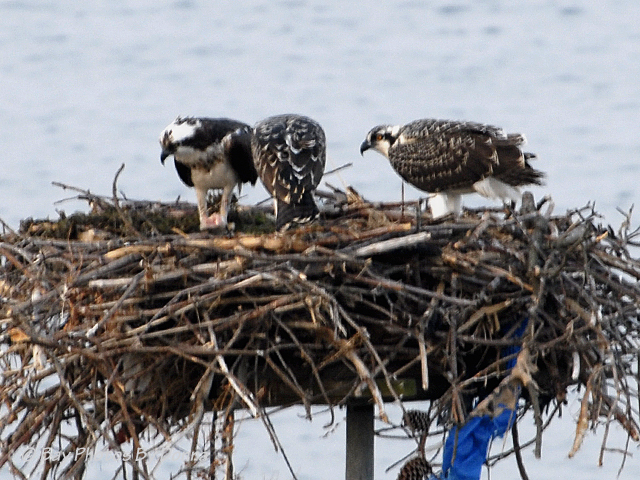 Can you imagine scratching an itch with those osprey talons?  They do it all the time, I can’t believe they don’t snag themselves. 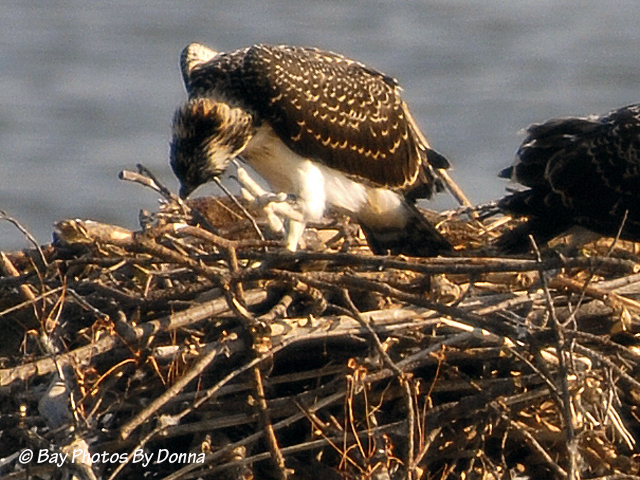 Some final shots from the last few days, the first has dad Oliver bringing more soft nesting material to the nest…

Some flapping practice and a feeding while a purple martin cruises by…. 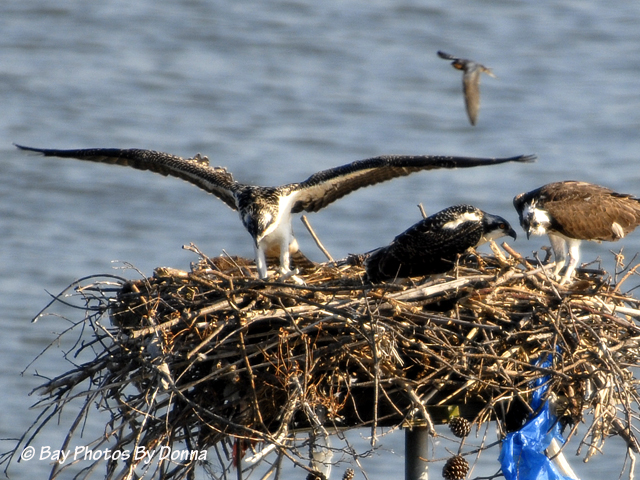 And another family portrait.  Olivia is on the right, still wet from a recent dunking.  🙂

As I finish this, I wonder if today’s breezes gave one of our osprey teenagers just enough courage to take that fledging soar to the sky.  Maybe!  Next post, I hope to be saying so!

6 thoughts on “Osprey Chicks To Fly Any Day”