Olivia Is One Fierce Protective Mom!

No one comes anywhere close to Olivia’s kids without her approval!  This past weekend I watched several instances where Olivia was in pursuit of another who invaded her domain.  With her kids flying now, it appears Olivia claims much more of the surrounding area.  One of the best dog fights I saw was with a Great Blue Heron, who was just flying by minding his own business.  Not only did Olivia scream while chasing him, the Great Blue Heron too was having his say, creating such drama and action.  Being unprepared, my photos are out of focus, but thought it was still  interesting to share.  In one, you’ll see the two chicks on the nest watching their mom’s fierceness as she forces the poor Blue Heron in all directions, who is just trying to get away and quickly out of the area. 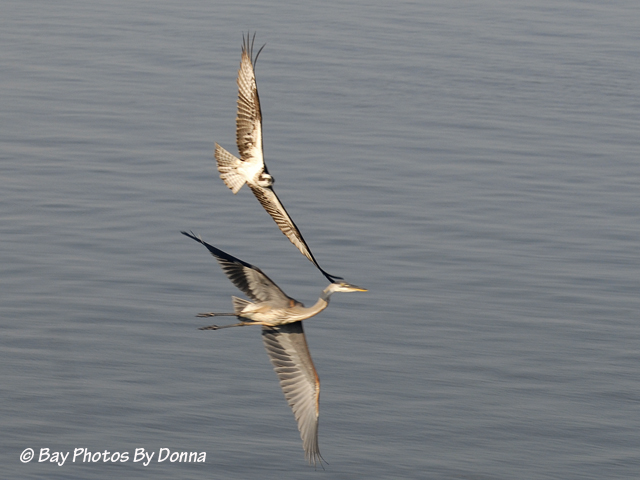 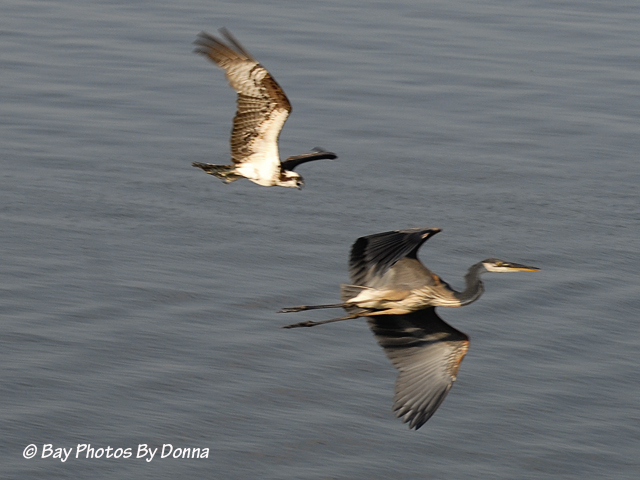 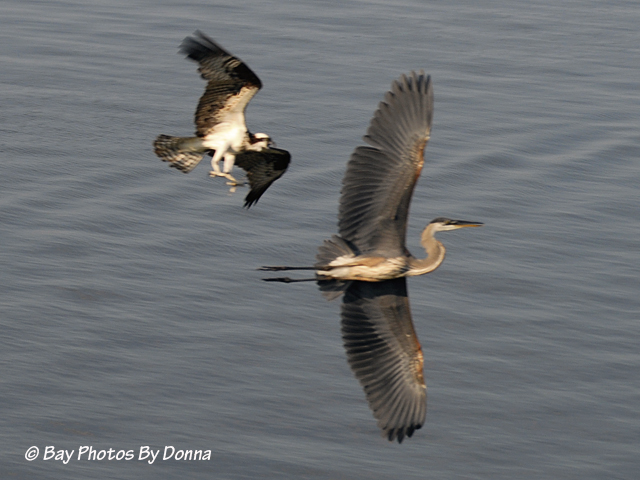 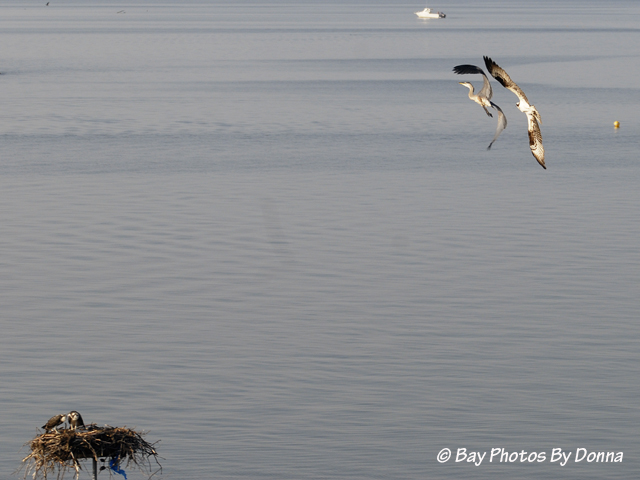 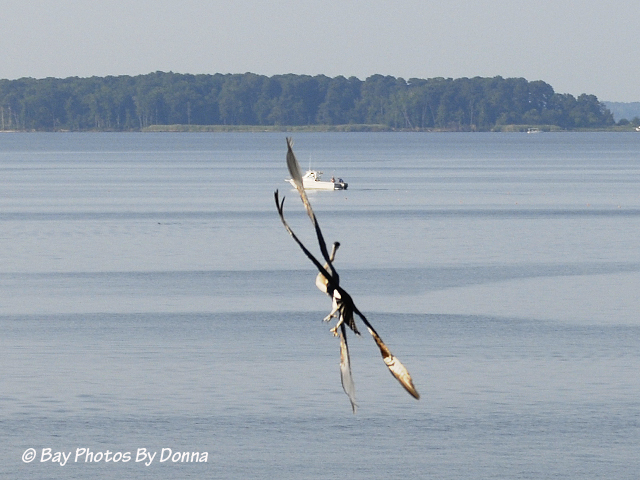 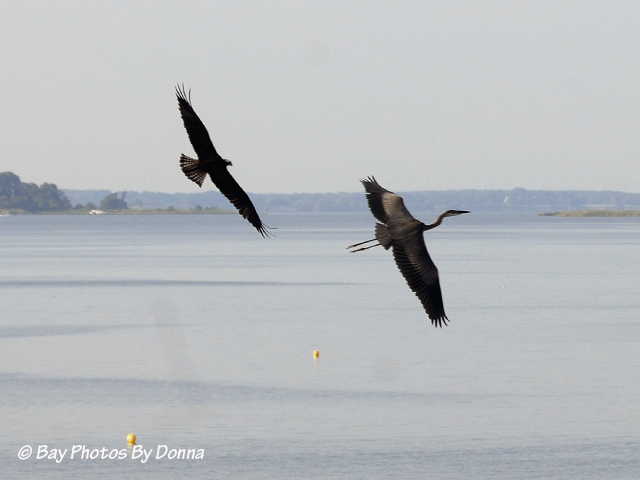 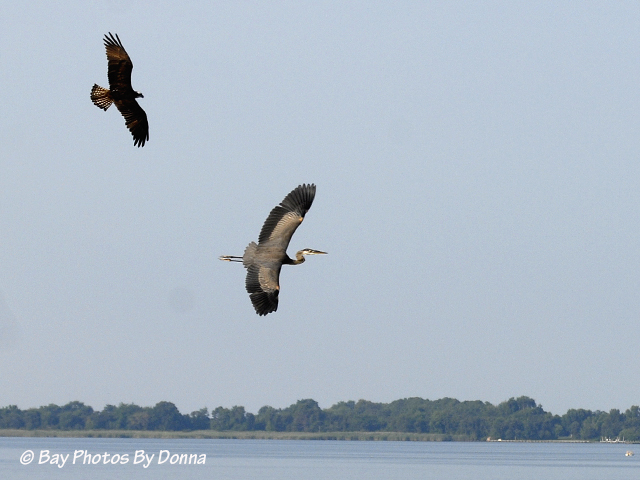 Thirty minutes later, Olivia was after another osprey while a single chick was on the nest.  This continued off and on all weekend!  You go, Olivia! 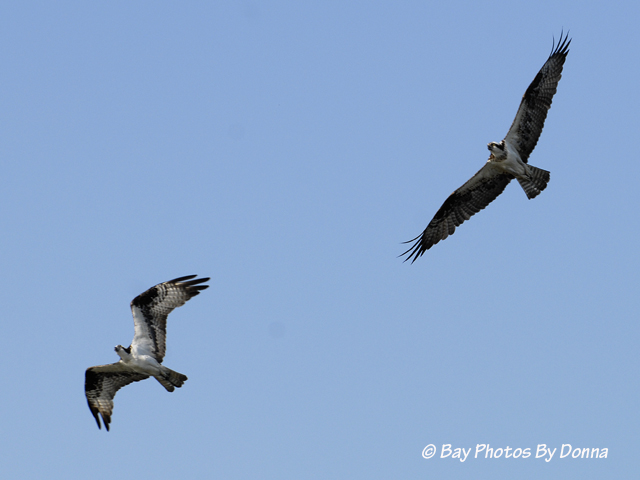 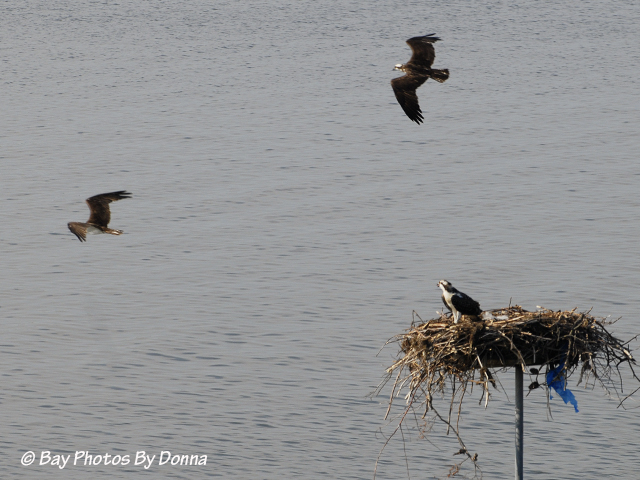 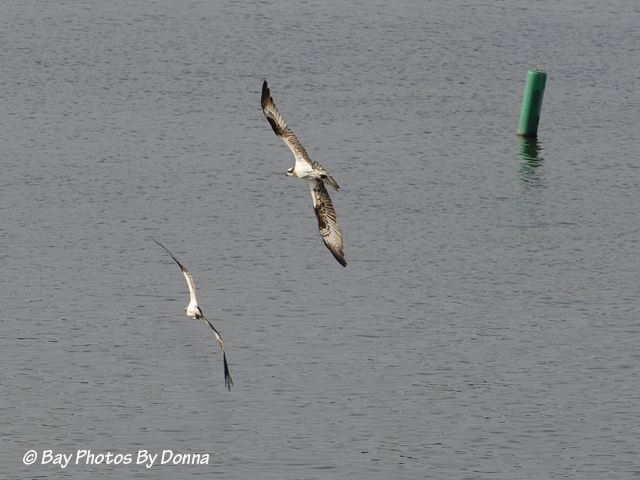 Since our osprey chicks’ fledging, it is already quite obvious the skill and control they have learned.  Watching them soaring and circling, you can just tell they are having a great time. 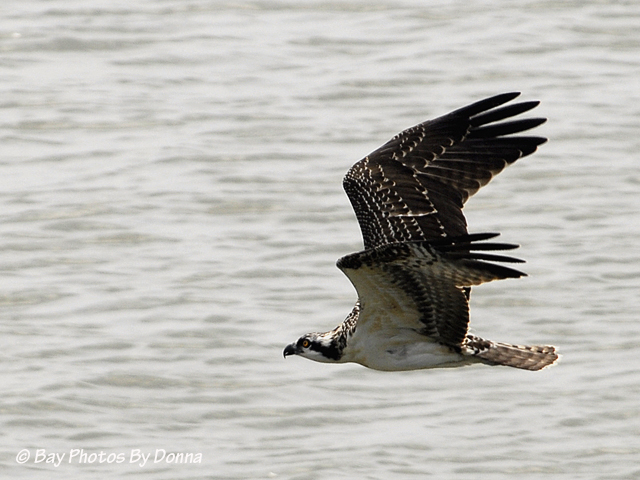 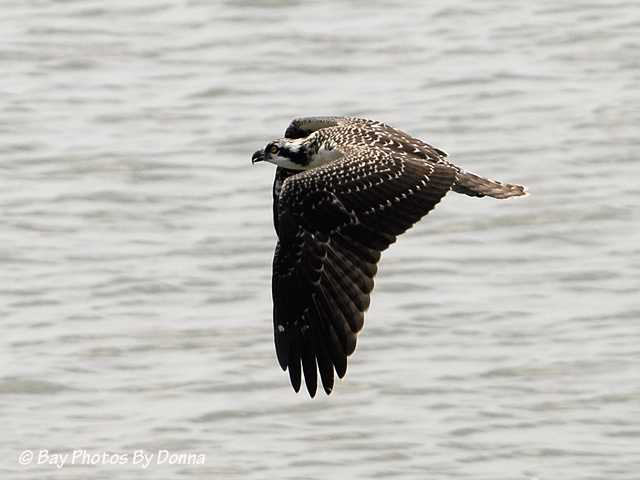 When they’re not flying or perching on the roof, both chicks will still return to their home for comfort and feedings.  Here’s a nice shot of our two healthy full-grown chicks. 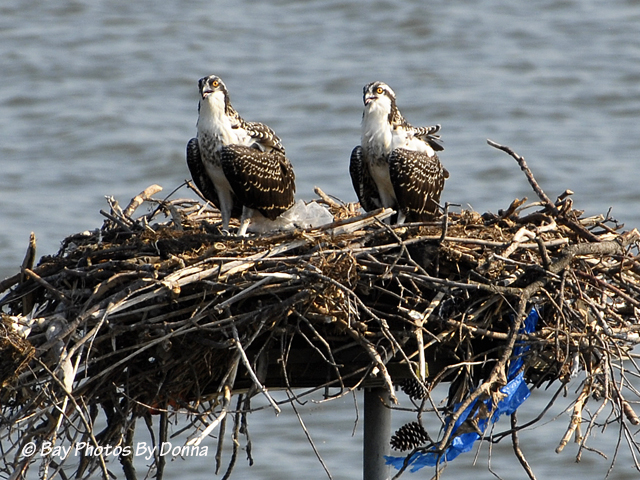 I found this interesting, both last and tonight early evening, I saw a mockingbird on the nest while it was empty.  With binoculars, I have seen on a hot still day tiny bugs buzzing all around the nest.  I’ve imagined it cannot be pleasant with the decaying fish parts that get imbedded within.  This little guy just hopped all round, grabbing and eating.  It was as if he found the mother-load of insects!  Yesterday, he was forced off the nest by a landing chick.  Tonight, I watched Olivia fly over while she watched the mockingbird eating and she did not seam to care.  She headed down to the Lipincott channel marker and perched there.   Hey, maybe Olivia hired a maid!  🙂  It is amazing, though, on how nature entwines different species who actually help each other without even trying. 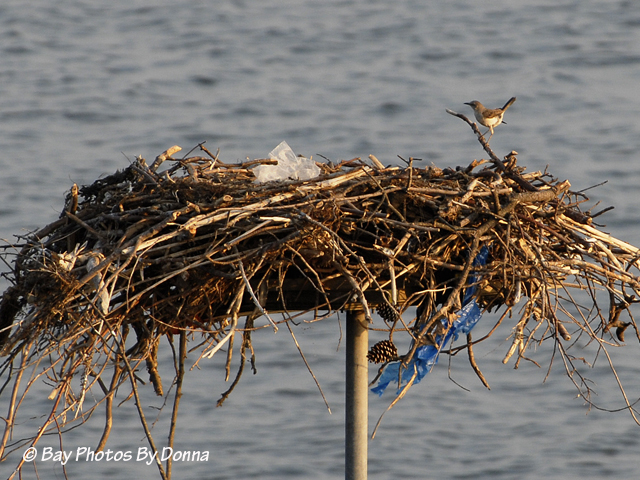 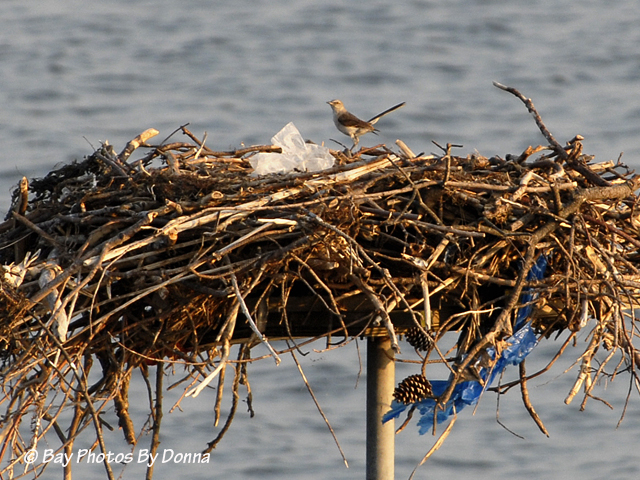 Osprey nests are always over water but usually not as high in the air as this one on the Bloody Point Lighthouse, at the south tip of Kent Island.  An adult osprey is perched on the top left, the disarrayed nest to the right.  There was no evidence of any chicks this weekend and the condition of the nest did not look good.  Maybe a first year’s try….or one of those storm cells that came through destroyed it.  The dedicated osprey was still there though watching and protecting his home. 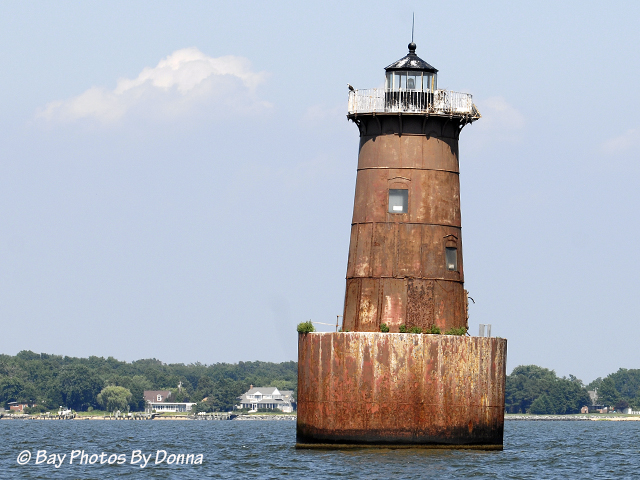 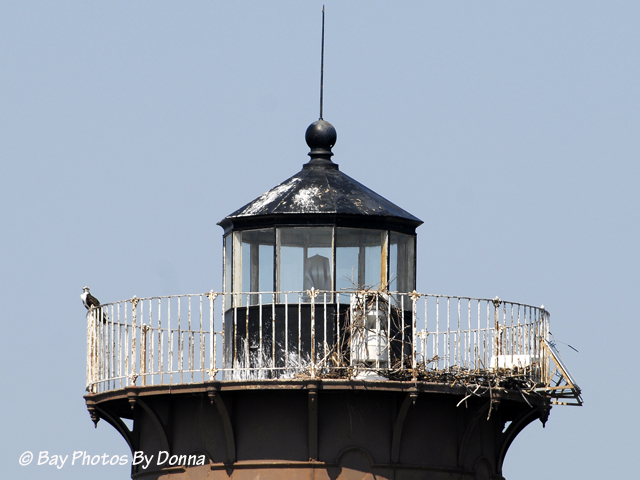 That osprey certainly has great waterfront real estate with a view!  🙂   Finally, coming back through the Kent Narrows on one of the channel markers, I captured a close-up shot of another osprey eating a fish. 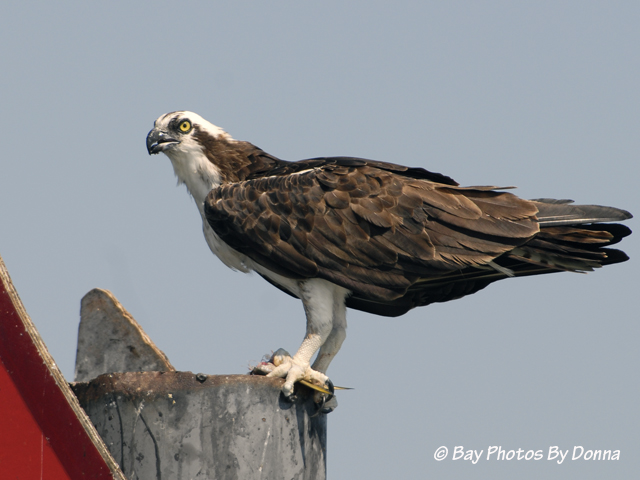