That’s right, I have now seen and can confirm Oliver and Olivia have two chicks!  Being so small, I can only get quick glimpses of them at feeding with binoculars, as they try to reach up for a piece of fish from momma.  I tried to capture a photo, and the following two are not the best in clarity since I’m enlarging so much.  In the first photo just to the left of Olivia’s leg, you can see a tiny light-colored beak and large black eye.  In the second one, Olivia is feeding him.

In another week, we should be able to see much more and whether there is a third and fourth little one.  🙂

I’ve got a few more shots, the next one shows Olivia taking a nap in the evening.  She must have been exhausted, I’ve never seen her take such a long one before.

The next one shows dad Oliver ‘bringing home the bacon”!

Oliver is apparently doing a great job in keeping up the food deliveries for the arrival of his hungry babies, as shown in the next photo.  In it Olivia is returning from chasing an eagle away from the area this morning, and directly under her on the nest is a fish already there and waiting for the next feeding.  Also notice Olivia’s talons are pulled in for the landing, just in case she should come close to landing by or on a chick. 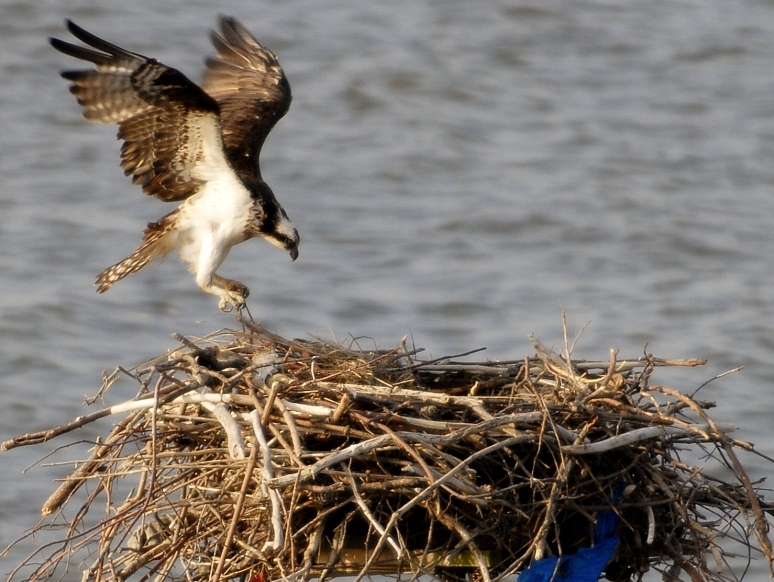 Finally, I thought this last photo was cute with Olivia looking over at her summer’s tenant.  See him just to the right and down a bit from Olivia on the branch?  Obviously, these little guys are not a bother to our osprey and sense their safety as they perch alongside the nest often.

A quick mention, Blackwater Refuge’s osprey pair on their webcam have successfully laid three eggs, with the first hatching to occur in about a week.  Be sure to check out their excitement for their first arrival, you might get to see the egg hatching on the cam.  Also their three eaglets on Blackwater’s other webcam are now almost full-grown and it’s confirmed two have fledged!